AN ODE TO PIZZA 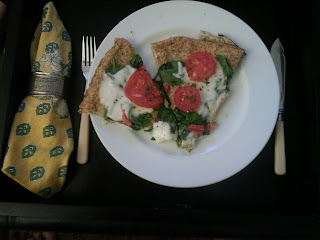 AN ODE TO PIZZA!!

I grew up in the pizza capital of America.  New York City.  OK - "arguably" the pizza capital of America, since Newark, Hoboken and Chicago make some fine pies.  But none of those cities had Rocky Lee Chu-Cho Bianca on Second Avenue near 52nd Street, the originator of thin crust pizzas with a special olive oil that made their slices a gift from God/dess.  Then we had Ray's Original Pizza parlor.  Well, parlors, plural, since there were a zillion Ray's around Manhattan - east side, west side, all sides.  My favorite was on First Avenue around 58th Street, just a few blocks from my apartment where I could walk over and get a pizza "fix" even in a blizzard.  But go to any pizza joint in NYC or NJ and you'll understand our devotion to these pies.  Maybe it's the water.

My first taste of this heavenly food was in Bayside, Queens, Long Island, New York, where I grew up.  Sal's was our local Italian restaurant and served hot, bubbly cheesey, traditional NY pizza.  I fell in love at first bite.  I think I was seven.  Is there a more perfect combination of flavors?  I don't think so.  But, full disclosure:  My name is ilona saari, and I'm a cheeseaholic.

I've had pizza in Boston when in college.  Not bad, but no NY slice.  Devoured deep dish in Chicago when I lived there for a year.  Very good, but not real "pizza" for a New Yorker.  Though, I did find the semi-deep dish pies from Goldberg's truly memorable.  Hey, Chicagoans, does Goldberg's still exist?  I've eaten pizza in Las Vegas, Miami, Hartford, and in San Francisco and Sacramento.  All good, but...

Then there's Los Angeles where I lived for years and where the Wolfgang Puck gourmet pizza revolution that swept the nation began.  Sitting in Spago and biting into my first BBQ chicken pizza or the wild mushrooms olives, sun dried tomatoes w/ Pecorino Romano cheese pizza was a food revelation.  But was it "pizza?"  I love the Margherita pizza, the smoked salmon pizza... even the veggie varieties... the list of tasty gourmet pies is endless.  BUT, as delicious as these all are, they are not NY pies... the classic cheese, at times topped with mushrooms or pepperoni or sausage... sometimes all of the above.  They just aren't!!!

But my days of eating pizza whenever I want are waning as the nation has become more conscious of making healthier food choices.  Lots of us are eating less carbs - ie: less bread!  Many people are going gluten free.  The burger, yes - the roll, no.  We're designing more and more salads with protein and veggies, and we're exercising more.  Baby boomers are fighting the bulge, cholesterol, and encroaching old age with a vengeance.  But, we lapse.  If I was back in Manhattan I would not be able to resist having a slice (often), so I'm thankful that my Ojai pizza joint, though good, doesn't make me fall to temptation.

Which brings me to cauliflower.

When I must have - absolutely MUST have some semblance of pizza, Richard will make me one (what would I do without him?).  No, not thin crust.  Not deep dish crust.  Not doughy crust.  BUT, healthy, often maligned cauliflower crust.  Yup, cauliflower crust!  Is it NY pizza?  Not even close.  Is it a Wolfgang Puck-style gourmet pizza?  Closer. Put your favorite toppings on it.  I like the
Margherita tomato, cheese and basil toppings. Though we've done others.  What it has going for it is the hot, bubbly cheese, olive oil, tomato, even tomato sauce if you desire.  And it pleasantly stifles the craving.

Here's how you, too, can sate that pizza craving with a healthful substitution.  It ain't real pizza, but then only NYC has real pizza. 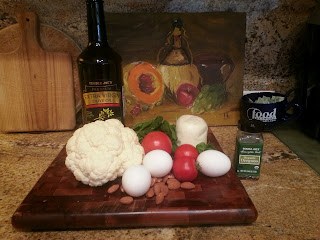 Preheat the oven to 400 degrees
Line a baking sheet w/ parchment paper
Coarsely chop the cauliflower and blend in a food processor to a nice texture
Put in mixing bowl w/ almonds, oregano and seasoning - mix w/ your hands 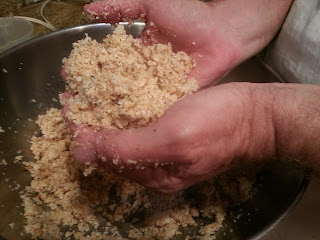 Make a well in the center and add the eggs
Shape into a ball
Put on baking sheet and roll/spread out, edges high 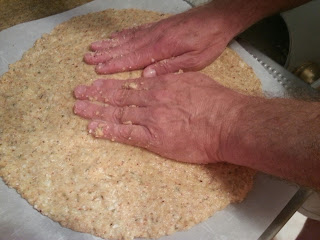 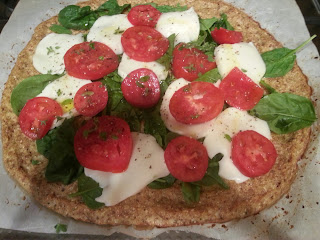 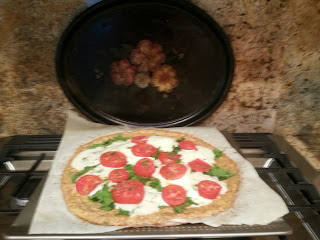