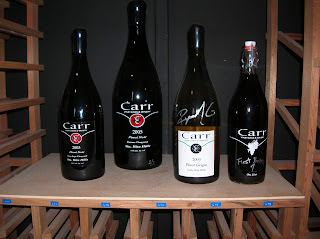 GOOD CARR-MA
(Carr Vineyards & Winery)
Doncha just love it when you explore an unfamiliar town and find a shop or gallery or restaurant that you love?  And when you find a new winery – well, that’s nirvana!  You know me there isn’t a tasting room too remote, too tiny or too rustic… I need a bumper sticker “I brake for tasting rooms.”  The Carr Vineyards & Winery tasting room, however, is far from too remote, too tiny OR too rustic.  Nope, it’s right there in the heart of beautiful downtown Santa Barbara, only a little over an hour north of Los Angeles, and has an artistic, industrial “décor.”  Translation:  It’s young, hip and a very cool place to hang out, with the added plus of being named the Best Winery in Santa Barbara by the Santa Barbara Independent newspaper. 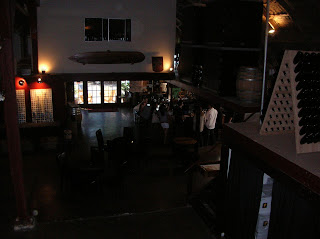 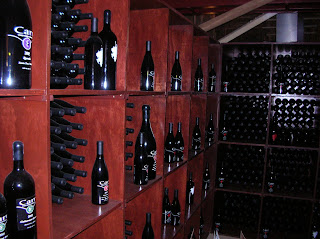 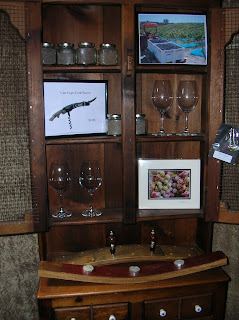 This is no surprise, since the winery’s owner, grape grower and winemaker is thirty-something Ryan Carr who, after majoring in graphic design in college, moved to Santa Ynez to learn the wine business.  Starting from the ground floor (in his case the dirt floor of a vineyard where he worked in the fields), he learned how to farm and care for grapes and worked his way up to making his first 10 cases of wine in his garage which he gave to friends and family.
As his farming skills grew, he started a vineyard management and development company and began producing more and more wine from the grapes that were grown under his supervision and exact specifications. Soon he was designing labels and moved his operation to Salsipuedes Street, where he also designed the winery and the tasting room, and was one of the first, if not the first, winery on the Santa Barbara Urban wine trail… (a wine tasting tour that provides an alternative to “Sideways” Santa Ynez).
When I walked into the winery/tasting room, every one of my senses was stimulated.  The aroma of the grapes crushed, fermented and turned into wine right there in that vast room lingered in the air and sent sipping thoughts tripping across my brain.
My eyes alit on the airplane hangar-like ceiling which Ryan covered in a cave-like “texture”... 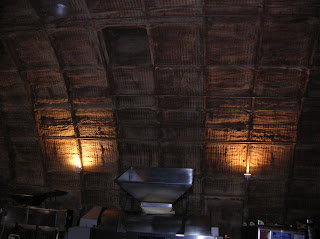 that triggered memories of the chalk caves in Reims, France, where Richard produced a Food Network segment on Ruinart champagne.  Ryan’s antique Riddler wine rack which is displayed amid new Riddler racks up on the winery’s second floor loft also brought back memories of Reims. 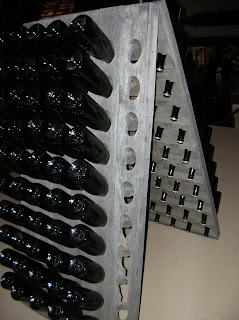 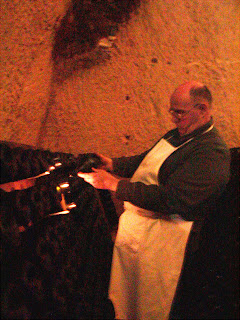 Note: this is not the “Batman” Riddler, but a man whose sole job is to stand in front of these racks and periodically turn the champagne bottles an eighth to a quarter of an inch each time so that the sediment from the wine’s second fermentation slowly makes its way to the neck of the bottle and eventually expelled before the final corking.  Talk about your carpel tunnel occupation!
As I wandered around the room, I admired the art exhibition which changes regularly as Ryan highlights various local artists. 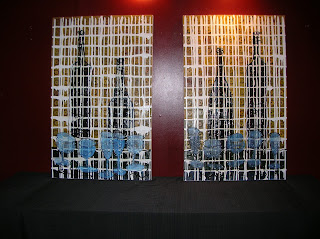 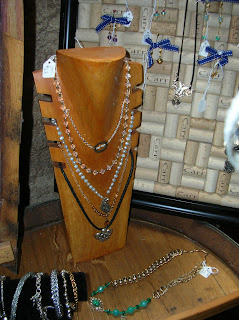 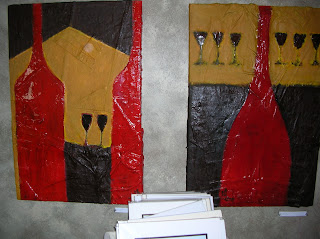 I also fell in love with the wine-stained backgammon and chess/checker board tables crafted by Rob Davis, another local artist. 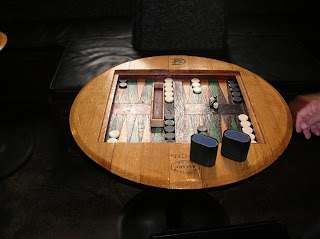 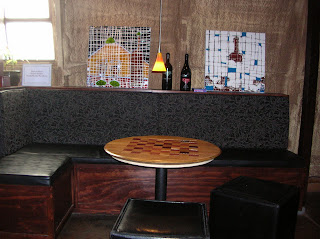 But my favorite art piece was a fun, whimsical robot sculpture in wood done by Ryan’s younger brother, Jonathan. 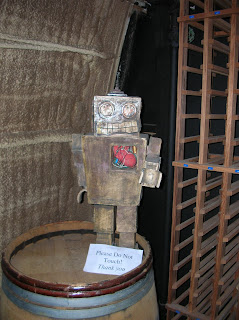 Of course a winery rises and falls on its wines, so it was time to taste.  The bar was crowded, so Richard and I joined friends at one of the bistro-style tables. 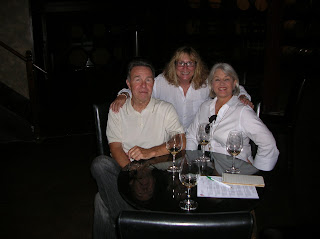 Jaime Heer, the tasting room manager, was our knowledgeable and gracious barista. 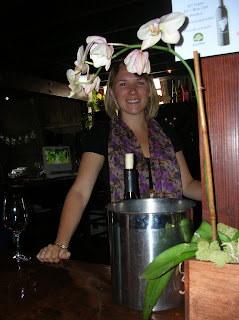 We started with the 2010 Pinot Gris, Turner Vineyard ($20) – I’m not usually a pinot gris lover, but this wine has a crisp apples and tea taste, but with some heft.  I loved it and can see it paired with one of Richard’s fabulous fish entrees. My taste buds perked up.
“Off the tasting menu” we were treated to the 2010 Santa Ynez Sparkler ($25), a sparkling rose filled with crisp berry flavors and a hint of kiwi and jasmine – Yum.  This wine would be paired beautifully with a ripe, runny (or baked) brie.
The 2009 Carr Pinot Noir, Turner Vineyard ($45) was next.  Aged 12 months in French oak, this wine had a wonderful nose of mushrooms and black cherries and a rich dark fruit and spice flavor.
Next was the 2008 Carr Pinot Noir, Three Vineyards ($38) – The wine’s taste was as deeply satisfying as its beautiful garnet color.  I loved this wine.  I wanted to grab a bottle, put in a straw and just drink.  No wonder it got a 93 point rating from the Pinot Report.
The 2008 Carr Cabernet Franc, Santa Ynez Valley was filled with scents of herbs, vanilla and berries and dark chocolate.  Rich in taste, I want Richard to serve this wine the next time he makes his mustard and garlic encrusted rack of lamb.
My favorite wine of the day was the 2009 Carr Morehouse Syrah, Santa Ynez Valley ($50) - This is a truly fine, full-bodied wine, lush and delicious with all those great nose and tasting notes of berries, plums, earth and spices.  No sharps or flats for those notes… this melody was definitely on key.
We finished our tasting flight with the 2009 Carr Late harvest Pinot Gris, Turner Vineyard ($20) – a dessert wine that was fermented in stainless steel and aged 12 months in neutral French oak and had flavors of honey and caramel.  Poached pears, you’ve found your pear-ing.
Another cool thing about Carr wines is that many of the bottles are ‘recyclable’ – finish with your wine, bring the bottle back and the winery will refill it at a big discount.  A few wines are even Carr on tap.  We got to taste the last of a delicious rose on tap, and were disappointed that we couldn’t buy a bottle.  No surprise… it was sold out.  Wine on tap is also a great feature for some of the wines Ryan sells to restaurants.  A green approach to selling wine.  No bottle or wine waste for the restaurant owner.
The next time you’re in Santa Barbara or anywhere near it, take a little Carr trip.  You won’t regret it.  Otherwise, check out your local wine store or restaurant wine list – or let your fingers do the walking (typing) and go to the website.  Instant Carr-ma.
Carr Vineyards & Winery
414 N. Salsipuedes Street
Santa Barbara, Calif. 93103
805-965-7985
info@carrwinery.com
http://www.carrwinery.com/
Posted by ilona saari at 2:26 PM No comments: