ANOTHER PORK IN THE ROAD (Pork Tenderloin a la Richard) 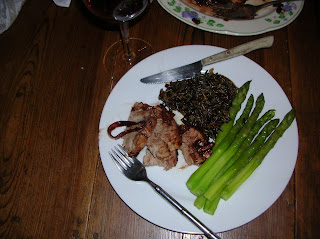 ANOTHER PORK IN THE ROAD
(Pork Tenderloin a la Richard)
I miss my mom’s pork chops.  Richard claims they were the best pork chops on the planet.  And, if you ever had a bite, you wouldn’t need convincing.  Sadly, I don’t have the recipe and neither one of us has ever been able to recreate those smothered in stuffing, succulent chops… Then there was  her Christmas fall off the bone crown pork roast w/ all those roasted around the roast crunchy, golden brown on the outside, white, mushy on the inside potatoes. I don’t have her recipe for that, either.
When I would make pork for my mom, she always told me it was delicious. Well, she was my mom, after all.  And my pork is good, but it wasn’t good like her pork was good. The only time she ever criticized one of my pork dinners was when I’d forgotten to buy applesauce and made up a sautéed canned peaches w/ a little reduced balsamic side dish ‘thing’ to add the sweet fruit flavor she always loved w/ pork.  But, my improvisation was a no go. It’s not a fruit flavor ‘thing’ I learned that night, but an applesauce ‘thing’ - homemade or ‘jarred’ - you just can’t serve pork without it.
Lamenting the fact that I never wrangled her pork recipes from her, I’ve lived w/ good but not as good as hers pork dishes.  But not any longer.  I now have a “to die for” pork recipe of my own.  Well, it’s Richard’s – but he shares.  I wonder, though, what mom would say about his new pork recipe?  No applesauce.  No apple anything… but, definitely a pork recipe to write home about.
Just with one Trader Joe’s inexpensive, boneless pork tenderloin and a little experimentation, he came up w/ a pork dish that rivals my mom’s.  I’m not Jewish and most of my Jewish friends don’t eat pork – but to steal a Yiddish phrase, when I bit into this tenderloin, I kvelled. 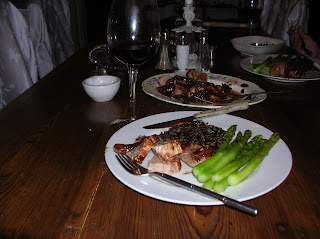 More Olive Oil
Balsamic vinegar
Red Wine
Half a jar of orange marmalade.
Directions:  Copied verbatim from Richard.
Note:  He likes to have fun when he cooks.

Put tenderloin in plastic bag with the sliced onion.  Mix olive oil and OJ and put in bag as well...
Let marinate in fridge for however long you remembered to do this before cooking it.

Remove from fridge. Pat the tenderloin dry, salt & pepper it.
Heat a pan over high heat, add a little olive oil... sear the pork til it browns on all sides.  Do not blacken.  This isn't a Cajun thing.
Put in a roasting pan lined with tin foil unless you really want to scrape and wash the pan after it's done which is a pain, so trust me.
Roast at 425 for about 18 minutes per pound.  Since this is a one pound tenderloin, 18 minutes should do it.

Meanwhile, add a little olive oil to a pan and caramelize the onion slices  from the bag.  When they're nice and caramelized, add the OJ and olive oil from the bag.  Also add some balsamic vinegar and red wine.  Maybe half a cup.  Reduce this a bit.  Then add half a jar of orange marmalade.  If it gets too thick add more wine.  If it gets too thin, keep reducing.  Eventually you'll have a nice sauce.

Remove the pork and let sit because standing is only for rib roasts.

Slice pork into medallions and slather the sauce over it.  Slathering is optional.  You can spoon it daintily on if you wish.
Eat it.
Posted by ilona saari at 1:30 PM No comments: