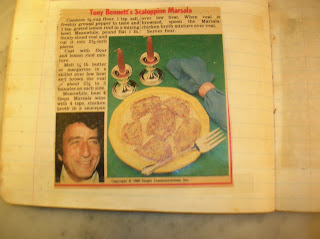 TONY BENNETT’S
VEAL SCALOPPINE MARSALA
OK, I lied.  Well, sort of.  The recipe’s the same, but the meat is chicken.
I cut this recipe out in 1985 and can’t believe I still have it.  I haven’t made it in years, but seeing Tony Bennett sing on TV recently at the World Series triggered my food memory and I began to crave that distinct taste of Marsala sauce.  But veal is expensive.  Chicken is cheap.
I know, chicken, again?!?!  But times are tough and, quite frankly, in this dish, the chicken doesn’t taste that different from veal.  And that’s not a lie.  In fact, I remember a restaurant scandal in NYC’s Little Italy many years ago, when a popular Italian restaurant was substituting chicken for its veal scaloppine and veal parmesan dishes w/o anyone noticing the difference for months.
So, since we had a bottle of Marsala wine somewhere in the back of our liquor cabinet and Richard loves veal Marsala, he decided to try out my old Tony recipe w/ a Costco boneless, skinless chicken breast from our freezer.  How cheap is that!? (No need to answer – that’s a rhetorical question.)
Well, I’m happy to report my craving is gone.  Last nite we had the loveliness of chicken; the glory that was veal was just another day..
Ingredients: 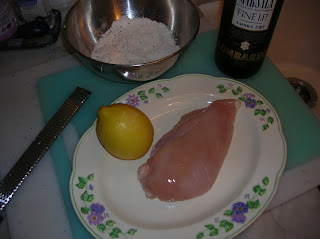 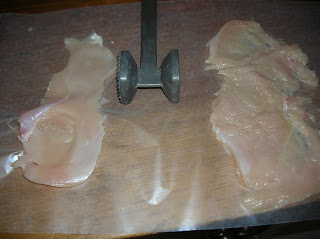 Heat the Marsala wine w/ chicken broth in saucepan over low heat.  Richard suggests you reduce it to thicken the sauce a bit.
Melt the butter in a skillet over low heat and brown the veal (chicken) about 2-1/2 to 3 minutes on each side. 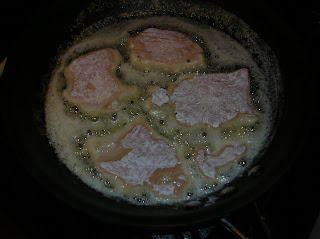 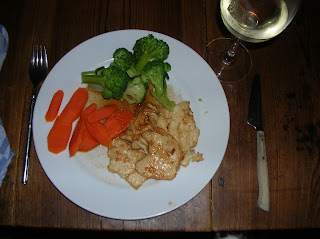 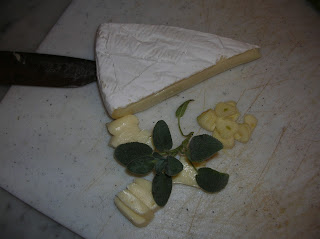 CHICKEN, AGAIN?!?!?
Well, if it’s stuffed w/ brie…
I think I’m starting to cluck.  Really.  Though we still have meat and fish once or twice a week, chicken seems to have possessed our kitchen… or Richard… or both.  Roast chicken.  Chicken stew.   Chicken soup.  Chicken piccata.  Chicken w/ Swiss chard.  Coq au vin.  Chicken w/ tomato salsa (all of which I wrote about).   Our house is a chicken in every pot… and pan house.  It’s a good thing I love chicken.  Cluck!
But sometimes too much of a good thing is too much of a good thing, no matter how much you want to make healthful meals on a budget.  So when Richard said he was making chicken AGAIN, I balked (well, it is baseball World Series time)… until he said “with BRIE!”  OK, as some of you know, one of my favorite food groups is cheese.  You put cheese on anything (except, perhaps, chocolate) and I’ll eat it.  You melt it (even on chocolate – well, maybe not) and I’ll devour it.
So, when Richard found this chicken/brie recipe in old issue (May, 1997) of Cooking Light he decided to make it.  Even w/ the melted brie, its low cal (220 – 29% from fat); low fat (7.1 gram – sat. 3.2’ mono 2.5; poly 0.7), high protein (30.8 g); manageable cholesterol 80mg; high calcium (62mg); reasonable sodium (263 mg); 1g fiber; 1.6mg; and a low 7.1 carb…  and pretty “healthy.”
And did I mention it was melty delicious?   I just did.
One reason it’s healthful is NO skin.  So, how do you stuff a skinless chicken breast?  Read on.
CHICKEN BREASTS STUFFED
WITH BRIE & CARAMELIZED ONIONS 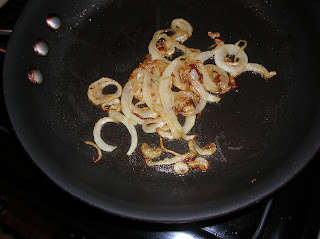 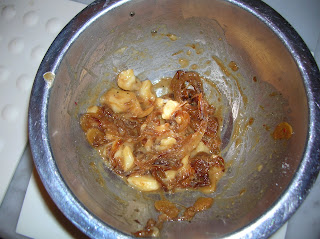 Cut a horizontal slit through the thickest portion of each chicken breast half to form a pocket.  Stuff about 1-1/2 tablespoon of the onion/brie mixture in each pocket. 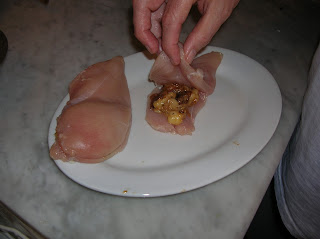 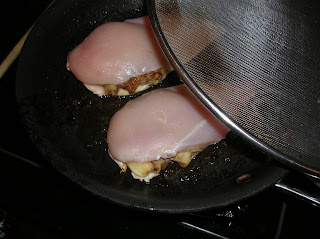 sauté 6 minutes on each side or until chicken is done.  Remove chicken from skillet.  Set aside; keep warm.
Add remaining 1/3 cup white wine, minced onion, sage, and minced garlic in skillet.  Cook over medium-high heat for 2 minutes.  Stir in broth.  Bring to a boil, and cook 7 minutes or until reduced to ¾ cup.  Return chicken to skillet, cover and simmer 2 minutes or until thoroughly heated. 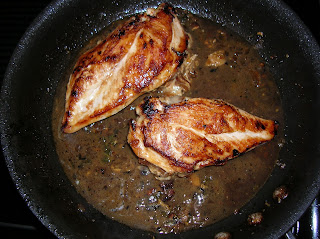 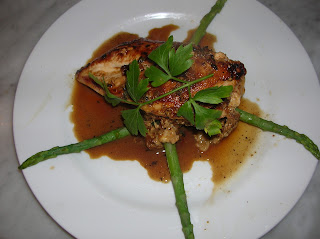