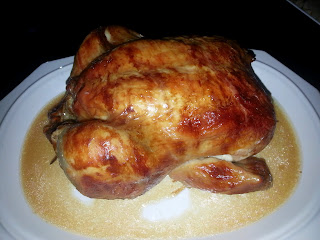 According to legend, coq au vin goes back to ancient Gaul and Julius Caesar, but there's no documented recipe until the early 20th century.  Julia Child loved this dish so much she included it in her first cookbook, "Mastering the Art of French Cooking" as one of her signature dishes, and made it often on the PBS show, "The French Chef."

But, it's pretty much accepted that coq au vin was a rustic dish that peasants might have eaten as they beheaded their greedy, exploiting 1% royalty as "citizen" Madam deFarge sat at the foot of the guillotine knitting their names into a long scarf as their heads fell into baskets. Vive la France!

Poulet au vin blanc, a variation of coq au vin was discovered in a cookbook in 1864 which pretty much supports the theory that coq au vin has been a staple of France for ages.

The preparation of the dish is similar to making beef bourguignon and just about as long... but here's how to make a delicious version of coq au vin in 30 minutes and no one loses his head... not even a chicken. 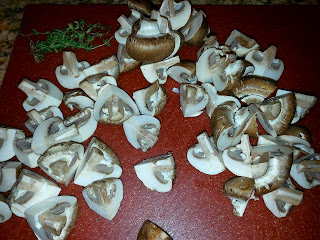 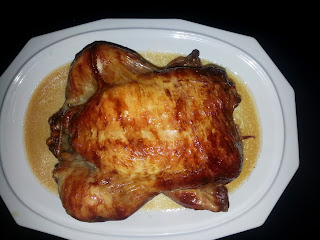 Cut chicken into eight pieces
Put bacon into an unheated large, high-sided skillet and cook over medium heat, stirring periodically, until bacon is browned and crisp, about 8 minutes.

Transfer the bacon to a small bowl with a slotted spoon; set aside. 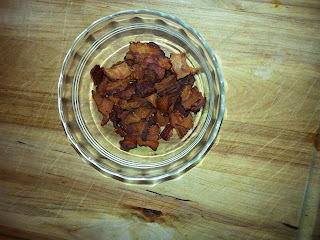 Discard all but 2 tablespoons of the bacon fat in the pan.  Increase the heat to medium-high.  Add mushrooms, 1/4 teaspoon salt and several grinds of pepper and cook until brown, 2 to 3 minutes. 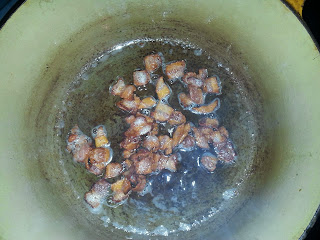 Stir in the garlic, flour and tomato paste and cook, stirring until the tomato paste darkens a little, about 1 minute.

Turn the heat down to medium, and whisk in the butter, a little at a time.  If the sauce tastes a little too acidic, add the sugar. 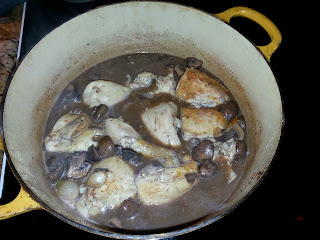 Spoon the sauce over the chicken pieces periodically to coat completely.

Toss the chicken in the sauce, remove the thyme stems, sprinkle with the parsley and serve. 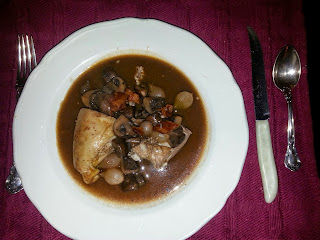