OVER THE RIVER & THRU THE WOODS... Pan-roasted Sunchokes 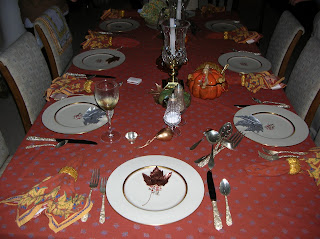 OVER THE RIVER & THRU THE WOODS…
Pan-roasted Sunchokes
“Over the river and through the woods to grandmother’s house we go…”
Well, actually we go over the Grapevine and up the I-5 to cousin’s house, but you get the picture.
http://mydinnerswithrichard.blogspot.com/2009/08/picnicking-on-i-5.html
As some of you may remember, Richard and I travel north to colder California climes and foliage for the Thanksgiving holiday.  We first hit brother Bob and wife Nguyen’s house for a yummy “pre-turkey day” rib roast dinner and sleepover, then traveled west to the lovely East Bay area outside of San Francisco for a few days of cousins, golf and great food.
Last year I posted about some of the goodies we had on Thanksgiving (a few replicated again this year), but this Thanksgiving dinner introduced me to a food I’d never heard of, never mind eaten: the sunchoke.
I’m still not sure what a sunchoke is other than it’s not a meat and may be related to the artichoke.  They’re both “chokes,” after all.  Perhaps, they’re half-siblings w/ the same mother or father… or perhaps, like Michele who made this dish and is my cousin (actually second cousin, but think of as a niece), the two chokes are cousins, but I digress…
When I queried her (yeh, “queried” – I like the word) about the dish, she told me it was an “acquired taste.”  So, ever the food taster adventurer (unless snake or eel are involved), I was looking forward to tasting it and to see if it was something I’d want to “acquire.”
It was.  And, if you’re looking for something new and different to serve at your Christmas/Holiday dinner, I definitely recommend this dish (though, as you’ll see from Michele’s note at the end, in moderation). 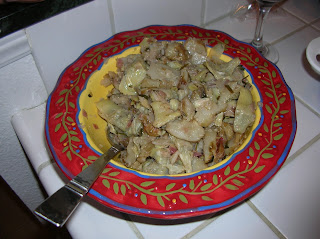 Below is the recipe she “borrowed” from the Feb./Mar. 2010 Fine Cooking magazine. They called it pan-roasted sunchokes and artichoke hearts with lemon herb butter.  It serves 4-6, but she embellished a lot and made enough for our large crew.
Below are the recipe and her comments:
PAN-ROASTED SUNCHOKES & ARTICHOKE
w/ LEMON HERB BUTTER

Ingredients:
2 T of extra virgin olive oil... or more
1 lb sunchokes scrubbed and cut into 1/4 inch wedges.. “I ignored this and sliced thinly.”  Keep the skins on.  (“They cook much more quickly the thinner they are, and you do not want to overcook.”)
8 oz frozen quartered artichoke hearts, thawed
2 T finely chopped shallot...”I used regular yellow onion and about 1/2 cup or more”
3 T dry vermouth or dry white wine.  “I had neither so used beer =)”
1 T fresh lemon juice....”I just squirted a bunch from the "bottled" stuff”
2 T cold unsalted butter, cut into small pieces
1 T fresh parsley, chopped...
2 t fresh tarragon, chopped...
pepper and salt
”and I used fresh sage from my garden also”
Directions:

”I used a Dutch oven (or you can use an ovenproof skillet) to heat oil and brown the sunchokes with 1/4 t salt until browned on both sides...don't over cook. 2-3 minutes.”
Add the artichoke hearts and more salt.  cook till browned.
Move the mixture to the oven at 400 for about 20 minutes. Sunchokes should be tender.
Transfer the veggies to bowl to keep warm.
Set the skillet (or dutch oven) over med heat, add shallot and cook stirring with wooden spoon till soft and lightly browned.  Add the vermouth and cook stirring and scraping to loosen any brown bits.  Reduce heat to low, add lemon and butter, one piece at a time, swirling pan to melt.  Stir in herbs, return veggies to pan and toss to reheat and coat with butter.
Salt and pepper to taste.

”Just a note...some blogs warn that sunchokes can cause gastrointestinal distress!  They contain inulin that gets things moving.  I ate the leftovers day after Thanksgiving and had more than I should have, and yes. What they blogged is true.  So, just keep in mind to enjoy in moderation!  Like our w
Posted by ilona saari at 9:57 AM No comments:

Labels: " artichokes, "Over the river and thru the woods, pan-roasted sunchokes and artichokes with lemon herb butter, sunchokes Fine Cooking magazine 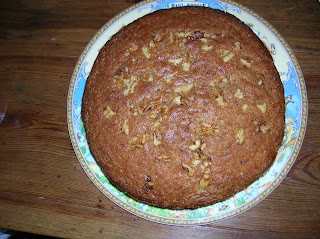 LAVENDER – FROM FIELDS TO TABLE
Part 4
Lavender Walnut Cake
Remember our friend Kyle who’s working on a second lavender cookbook for the annual Ojai Lavender Festival? The cookbook Richard’s been trying out and adapting recipes for?  Well Kyle and her husband, Stuart, came for dinner the other night and Richard decided to surprise her with his own lavender dessert concoction.
Years ago I found a walnut cake recipe in a magazine that I’ve baked often with great success.  I know, I know – me?  Well, yeh!  You know I really do cook, right?  And often.  I’m just not the cook Richard is.  Anyway, Richard always loved this cake and thought it would be even better with a hint of lavender.
He was right.
Check it out.
LAVENDER WALNUT CAKE
Ingredients:
Cake:
7 tablespoons unsalted butter, at room temperature
Dry bread crumbs
1-3/4 cups all-purpose flour
1-1/2 teaspoons baking powder
1-1/4 cups walnuts, ground
1-3/4 cups sugar
8 eggs, separated
2 teaspoons ground culinary lavender buds
½ cup walnuts, coarsely chopped
Syrup:
1cup water
¾ cup sugar
½ cup brandy
1 tablespoon culinary lavender buds
Directions:
Cake:
Preheat over to 350 degrees.
Using 1 tablespoon of butter, grease a 9-inch round cake pan and dust it w/ bread crumbs, shaking out the excess.  Set aside.
Stir together flour, baking power and ground walnuts; reserve.
In a large mixing bowl, cream the remaining 6 tablespoons of butter, the sugar, egg yolks and lavender until the sugar dissolves and the mixture is very smooth.
In another bowl, whip the whites until firm.  Fold them into the butter mixture.  Little by little, add the flour mixture to the batter.
Turn the batter into the prepared pan and sprinkle w/ chopped nuts.
Bake for 1 hour or until toothpick inserted in the cake comes out clean.  (Richard suggests you start testing after 45 minutes.)
Syrup:
While the cake is baking, bring 1 cup of water, lavender buds and sugar to a boil in a small sauce pan. Turn off heat and let steep for 15-20 minutes.  Strain and discard lavender.
When the cake is baked, turn it out onto a rack, invert, and place, right side up, on another rack.  Position the rack over a baking pan or plate w/ raised sides.
Re-warm the syrup.  Add the brandy.
Prick the cake deeply all over w/ a skewer or toothpick.  Brush the syrup over the hot cake.  Work slowly so that the cake has time to absorb the syrup.
Serve at room temperature or chilled.
Serves 6 to 8
Check out Volume 1 of the lavender cookbook.
http://www.ojaivalleylavenderfestival.org/pages/cookbook.html
Posted by ilona saari at 7:46 AM No comments: 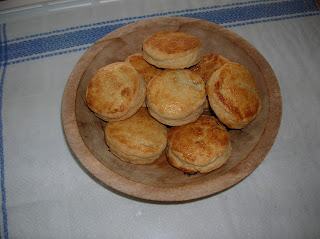 LAVENDER – FROM FIELDS TO TABLE
Part 3
Lavender Scones
So, the last time we “spoke” Richard was improvising and testing recipes for a new lavender cookbook.  Then we broke for a week of thanksgiving with family in northern California, including wine tasting in Lodi (but more on that in future blogs)…
Now that we’re back in L.A., it’s time to tell you about his most recent kitchen foray.  Lavender scones!  A recipe submitted by Sandy Messori for cookbook consideration.  Can I just say, skoal to these scones.  Whether you serve them at tea time with your favorite jams or have them as a midnight snack while dressed in your jammies, they are absolutely delicious.  I think this is a winner for the new cookbook.
No need to say anything else except here’s the recipe.
LAVENDER SCONES
Ingredients:
1 tablespoon dried culinary lavender flower buds
1-1/3 cup heavy cream
2-1/4 cup flour
1 teaspoon baking power
¼ teaspoon baking soda
1 tablespoon sugar
¼ lb (1 stick) unsalted butter
Directions:
Preheat oven to 375 degrees
Combine lavender and 1 cup cream and bring to a boil. 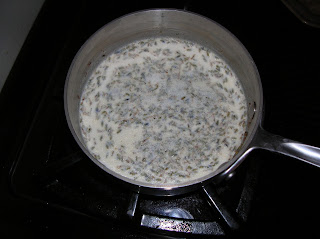 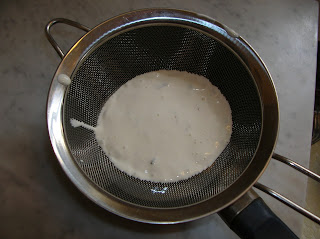 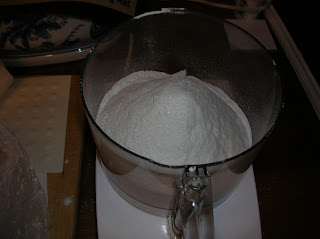 Cut up the butter and add it to the flour mix in the food processor.  Pulse until little balls form.  Stir in the cup of cream and mix until dough holds together. 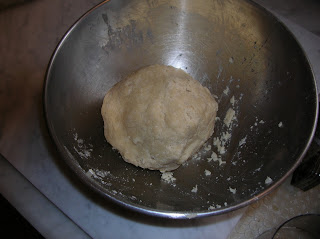 Wrap the dough in plastic wrap and chill well. 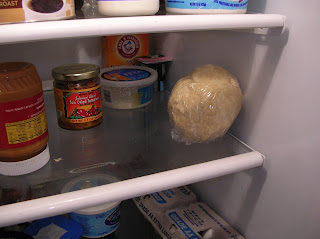 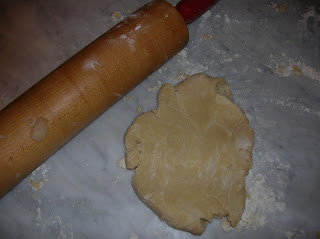 Arrange ‘rounds’ on a greased cookie sheet or a silpat.  Place close together, brush tops w/ remaining 1/3 cup of cream for a glazed finish... 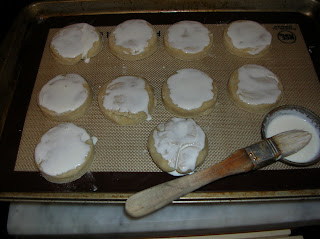 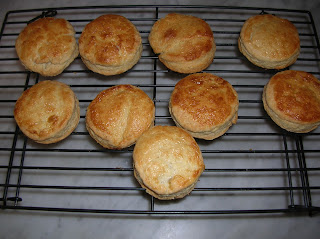 I especially love them when they’re still warm from the oven and dripping w/ butter.
Enjoy!
Volume One of the Ojai Lavender Cookbook
http://www.ojaivalleylavenderfestival.org/pages/cookbook.html
Posted by ilona saari at 1:31 PM 1 comment: