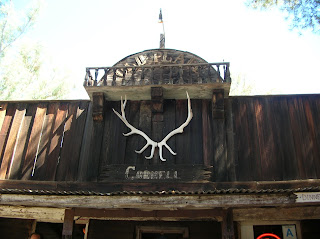 To quote Tevye in “Fiddler On The Roof,” – “Tradition!”

For years, Michael, my “boy” BFF has been taking me on birthday “culinary” and “design” adventures - I even started blogging about them when I began this blog.  Sometimes it’s just the two of us, sometimes Richard joins in.

We’ve toured the Hollyhock and Ennis houses, both designed by Frank Lloyd Wright…

We ooh-ed and ah-ed through four houses located on the Malibu Estate compound Barbra Streisand donated to the city (a “country barn,” a Mediterranean villa, an art deco house and a craftsman bungalow all decorated by Ms. Barbra), then had “tea” on the patio…

So, when he called this year to invite me/us for a b’day brunch at the Old Place, I jumped at the chance to experience this new food adventure.

The Old Place is, in fact, an “old place” located in the Santa Monica mountain town of Cornell. I’d been hearing about this restaurant for quite some time, but had never eaten there. This beautiful mountain area is where the television series “M*A*S*H” and “Dr. Quinn Medicine Woman” were shot. Cool.

In its youth, the Old Place was Hank’s Country Store where locals and travelers saddled up (literally) to buy their supplies. But when Tom Runyon bought it, he converted the old place into the “Old Place,” a rustic restaurant that he and his wife ran for more than 40 years. 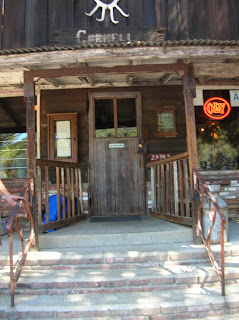 The menu then was short and consisted mostly of steaks cooked over a red oak fire, clams, baked potatoes and crusty sourdough bread, all of which you could wash down with beer or wine. 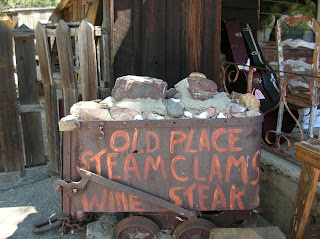 Though locals flocked to the place, it wasn’t unusual to see Steve McQueen, Jason Robards or other Hollywood celebs sitting in a booth or on a bar bench. All these years later, locals still hang out there, complemented by Valley-ites like Richard and me, surfers from Malibu, movie and TV stars, and bikers. Jay Leno has been known to “saddle up” on one of his “hogs” for a meal.

The minute we arrived, it felt as if we had been transported to another more rugged time. Before we went into the restaurant we checked out the Cornell Winery next door with its rustic, country charm and private dining room with a huge, antique crystal chandelier hanging over a long wooden table, not to mention an abundance of fine wines for sale.

Directly across the street from the Old Place, is the Peter Strauss Ranch, a many acre former park that the actor bought and donated to the National Park System which maintains nature trails and picnic areas. Peter also raised peacocks which still live behind the Cornell Winery and roam freely on the winery’s and Old Place’s property.

Tom’s son now runs the restaurant and though the menu has expanded to include such dishes as wild rosemary pale ale chicken, oak grilled chicken pot pie, oak grilled fish, and a noodle and cheese bake, the woody saloon atmosphere remains, even if the hitching posts outside are gone. 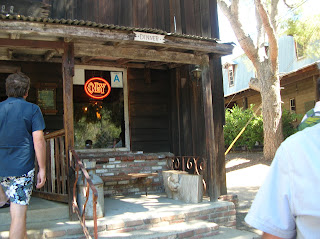 The interior truly made me think of the saloons in TV westerns that I watched as a kid. Seeing women behind the bar brought visions of Miss Kitty in “Gunsmoke,” though their wardrobe brought me back into the 21st century. 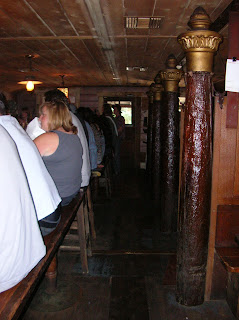 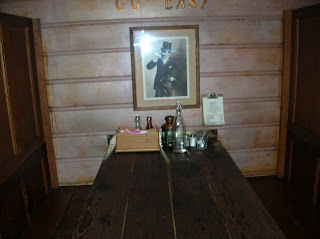 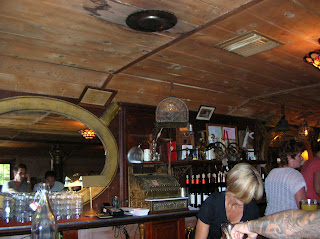 We settled in at a table in back filled with artifacts and cowboy collectibles... 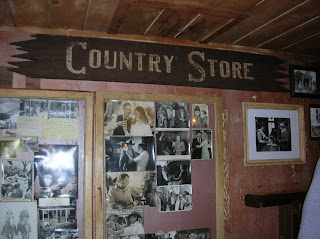 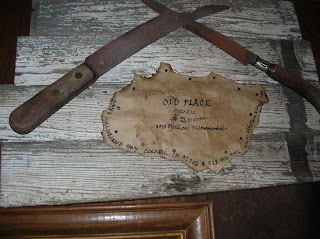 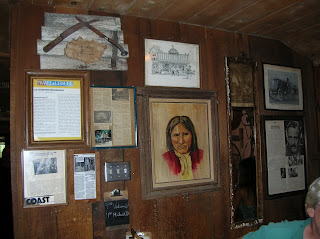 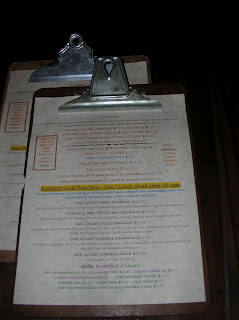 First we shared a breakfast “appetizer” – a gooey homemade cinnamon roll that was probably the most delicious, gooiest cinnamon roll I’ve ever eaten. 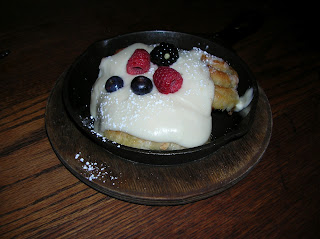 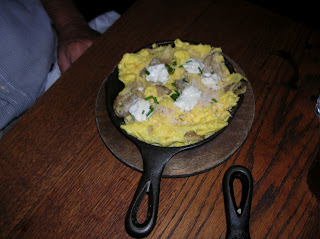 Individually made in a cast iron skillet, the frittatas have a thin sliced crispy potato base and are then topped with a sourdough herb crust. Of course, I had to have a taste. It was frittata perfection. Other frittata choices include a sausage, ham, grilled onion and Irish cheddar concoction, a grilled seasonal veggie frittata and one made with goat cheese, sun-dried tomato and spinach. 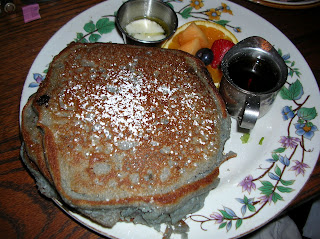 He was going to order the 5-stack, but our lovely waitress warned him that the flapjacks were huge and unless we were thinking of feeding a small village, the 3-stack would be more than enough. Not only were they huge as “advertised,” they were moist and truly mouthwatering (yes, I had to have a bite of this, too). His “side” of applewood bacon was the thickest bacon I’ve ever had (yup- grabbed a slice). Hearty – bacon-y (a good thing). 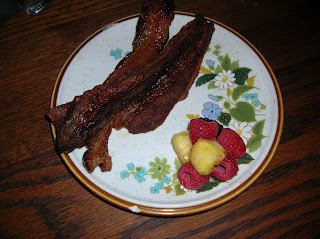 Famous for their red oak grilled steaks, I opted for steak and eggs. Though my steak was a bit chewy, the flavor was amazing, and my eggs were cooked exactly the way I wanted them – over easy. 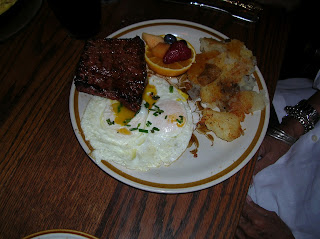 After brunch, we walked the property and saw horses corralled behind a limo... pretty sure the horses didn't arrive IN the limo (unless they were Ann Romney's).  :) 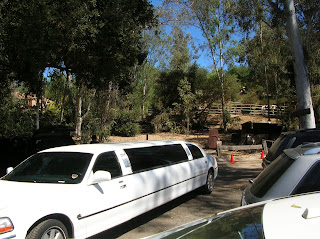 ...then checked out the “Mailroom,” the restaurant’s private dining room that seats parties from 9-12. 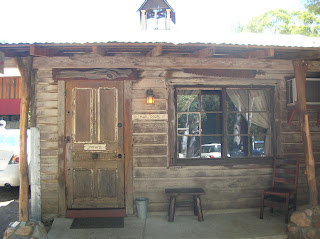 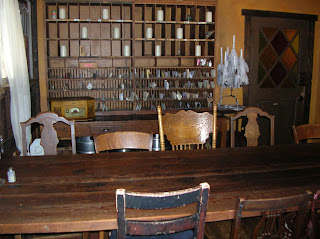 Loved the rustic room with its tons of candles and artwork painted by Tom’s wife, Barbara. 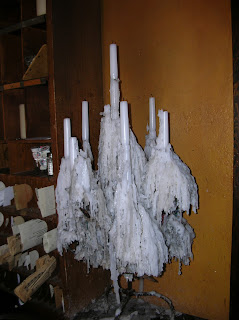 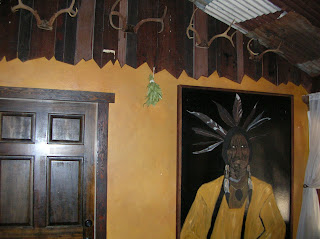 When it was time to leave this cool old place, I was a happy, sated camper.

Thank you, Michael for keeping my birthday tradition alive.

Check out a few of my prior Michael birthday adventures: