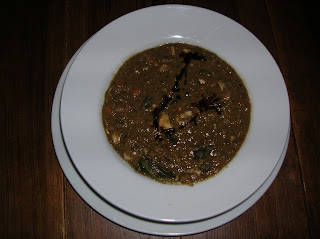 OK – it’s winter a/k/a the flu season.  But like the smart grown-ups we are, Richard and I got our flu shots early.  No way were we going to get the flu.  Well, as we all know, the flu isn’t the only “disease” you can get in winter… there’s always the tried and true severe winter cold, coupled with severe bronchitis.  And, for the past week, we’ve been house/couch/bed ridden with both.  Our house looks like an infirmary and sounds like a TB ward… cough, cough, cough – sniffle, sniffle, sniffle.  Woe is me.  Woe is us.

There’s an adage: feed a cold, starve a fever.  So, since neither of us had a temperature past 100, we entered into “feed a cold” mode.  We made improv chicken soup from box broth, frozen chicken dumplings from TJ’s and fresh veggies… even had a can of Campbell’s chicken noodle and tomato soup for a couple of lunches, but as our health improved slightly, our taste buds became more discerning. We wanted really homemade soup... something gourmet-y… But we were still too weak to make a run to a market.

Hence, Richard’s own lentil soup.  Well, maybe not his own, but his version of a French lentil soup.  We had about two tons of lentils in our ‘larder’ he bought for a dollar somewhere, so why not?  We had spices and some aging carrots, wilting celery, and a yellow onion.  Perfect for soup. And why not throw in the leftover fresh spinach at the bottom of the veggie draw. But we didn’t have a fresh tomato in the house… not even a can of peeled and chopped or stewed tomatoes.  We were tomato-less until he found a congealed jar of sun-dried tomatoes in the back of the fridge. After warming the jar to liquefy the oil Richard drained them, cut them up and added them to the mix.  A tomato is a tomato, right?
We’re still not better.  But, the lentil soup was sun-dried scrumptious and healthful (all that protein, iron and fiber, ya know).  Sometimes you just need a change from chicken soup when you’ve got a cold. 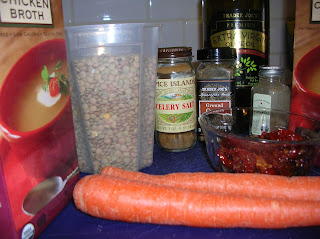 Heat oil in pot.  Over a medium/low flame, add the chopped onions, carrots, celery and salt and “sweat” seven minutes or so. 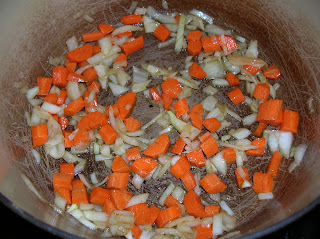 Add lentils, tomatoes, stock, coriander, cumin and pepper and increase heat to high.  Bring to a boil, then cover and simmer 35 to 40 minutes. 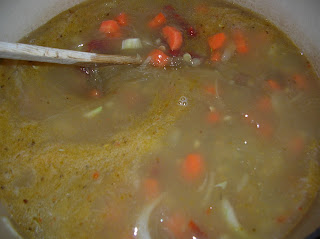 Just before serving, fold in the spinach 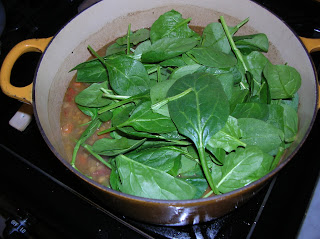 and let simmer another minute or two. 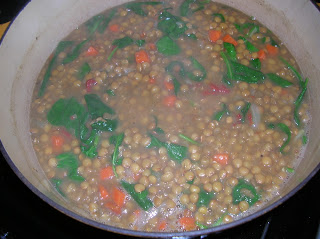 Then puree the soup with a hand blender til you get your desired consistency.