ILONA & RICHARD'S EXCELLENT ADVENTURE - Our Cabin In The Woods 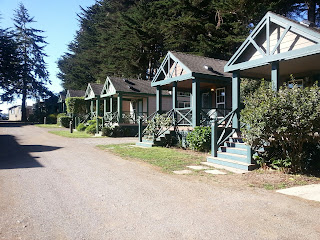 ILONA & RICHARD'S EXCELLENT ADVENTURE
Our Cabin In The Woods

After more hairpin turns at 5 mph (you remember, brother Bob couldn't stand my whimpering in the back seat over the heights and my visions of all of us flying off the cliff a la Thelma & Louise) we finally arrived in Point Arena, which served as our base camp for all our Mendocino exploration.
We check into our cabins in the woods and I prayed we wouldn't recreate 2012's horror/comedy movie "Cabin In The Woods."  Well, I wouldn't mind the comedy, but will definitely pass on the horror.  As I searched the area for any pending "horror," Bob and Nguyen got settled in their cabin and Richard settled us into our cabin next door. 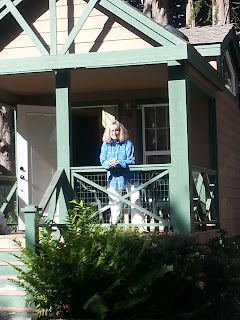 The cabin was darling.  A living room/dining room area with complete kitchen, a separate bedroom with a queen bed and a nice size bath.  TVs in both rooms so we could catch up with the world when needed.

It was late in the afternoon and suddenly very overcast and my writer's imagination took over (I do write mysteries, after all).  I hoped the dreary sky wasn't an omen that those marauding Buckners who abused family member Patricia and decapitated cabin dwellers in that film were somewhere nearby.

Oblivious of my fear, Bob and Nguyen decided to take us into Point Arena's quaint little town for a bit of sightseeing, then onto the area's lighthouse.  I love lighthouses, a love inherited from my Gloucester, Massachusetts ("A Perfect Storm") raised mother.  I think the first one I ever saw was at Montauk Point on Long Island.  I had visions of one day living in it as the lighthouse keeper.  I was only eight.

Enthralled by this new lighthouse, I did a photo "study"  (I love my Samsung) ... 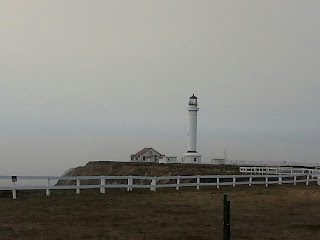 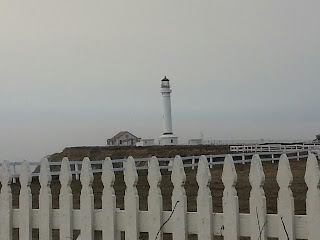 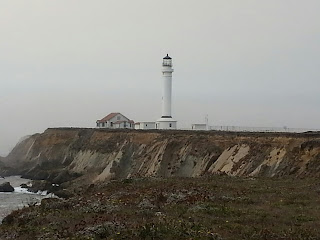 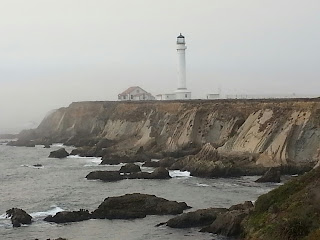 ... with one shot of the seals lying on the rocks near by. 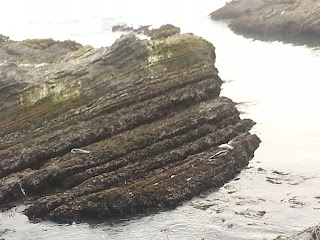 After the long, harrowing (for me - that height thing), but visually awing 5 mph drive and touring the town and lighthouse, we all were tired, so we decided to go back to our cabin, open up a bottle of wine (or two) and make supper.  Nothing bad could happen in such a darling cabin, right?

Tomorrow is another day. 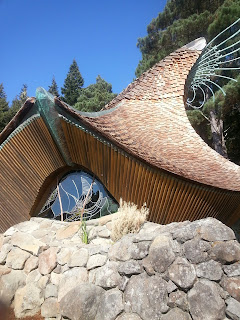 Brother Bob, sister-in-law Nguyen, Richard and I left "the DOG house" in Bodega Bay sated from our lunch of hot dogs and rectangular burgers in rectangular buns and headed north on PCH (Pacific Coast Highway) a/k/a the "the 1" to continue our excellent adventure.

The views were spectacular.  Well, when I actually would look.  Being a tad height "phobic" my life flashed before my eyes every few seconds as I saw us careening off the mountain a la "Thelma & Louise" and crashing into the ocean hundreds (and hundreds) of feet below as we drove up and up the mountains overlooking the ocean.  But my brother loves me (or couldn't stand my loud whimpering) and drove about 5 mph and stopped often so I could actually get out of the car and put my feet firmly on the ground as I took a photo or two. 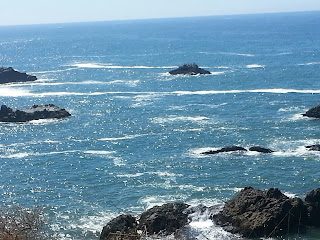 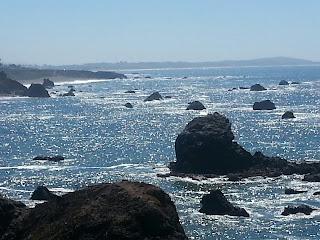 As we slowly headed north (remember, Bob's driving 5 mph), we reached Sea Ranch, a many mile development of high end coastal houses (some of which are rented out to vacationers), each nestled on large lots often miles apart with views of the ocean.  Hobbits also live there.  I know because there, servicing weary travelers and the inhabitants of Sea Ranch, sat the Sea Ranch Chapel which can only be described as a chapel made for hobbits.  The set designer for the "Lord Of The Rings" movies was definitely inspired by this chapel or was a hobbit himself. 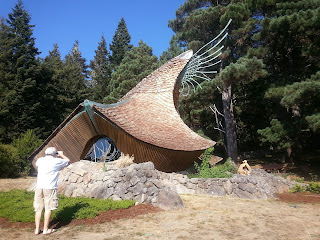 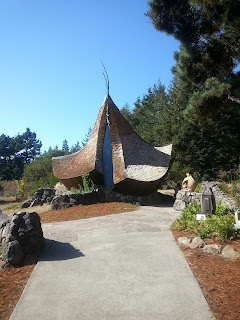 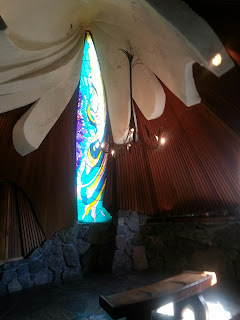 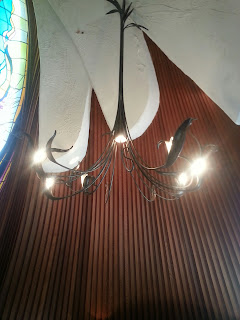 Inside, we sat on a bench and read the brochures that informed us that the chapel (a non-denominational sanctuary for prayer, meditation and spiritual renewal) and surrounding grounds were a gift from residents Robert & Betty Buffum (sounds like hobbit names to me).  The artist and architectural designer was James Hubbell (Hubbell, hmmmm another hobbit?) and used all local materials and local craftsmen and contractors.

I sat silently trying to meditate away my fear of heights.  No such luck, but I think my spirit was renewed.  I did fall in love with the artistry of this little chapel.  It was definitely hobbit forming.

As we left the chapel and drove north through Sea Ranch-land, I continued to search for a hobbit sighting, but not only did I not see a hobbit, I saw no one anywhere on their decks or property in the miles of pristine land overlooking the Pacific. It was a hobbit ghost ranch.

Next stop, our cabin in the woods in Point Arena, still some hours away.