PANDEMIC DIARY - How I Spent My Sequester - Pt. 3 - Breakfast

PANDEMIC DIARY
How I Spent My Sequester - Pt.3
Breakfast 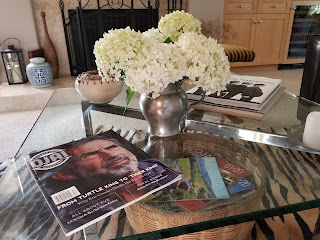 To Keto or not to Keto, that is the question?

Backstory - since the sequester, I've hiked (well, as I've mentioned before - "hike" is a 'loose' definition of what I do on most mornings).. after which, I'm hunched over my computer for hours "talking" to friends and bitching on Facebook, scrolling thru Twitter and Instagram... BUT, I've also started the sequel to my political thriller "Freeze Frame" (www.ilonasaari.com), written articles for the Ojai Quarterly and Ojai Monthly glossy magazines, binged on television series and gained 5 pounds (one lb + ounces for every month) so far!  It's all Richard's cooking's fault.  Hey, my blog isn't called "My Dinners With Richard" for nothing - and I've never claimed to have any will power when it comes to food (I am a food lover/writer, after all)...  Here's a taste as to how these 5 pounds set up camp in my body.

When left to my own devices, I start the day off most mornings with an egg or some cheese or a handful of almonds or a slice of meat - maybe an avocado - for breakfast - but on weekends, Richard often makes us breakfast/brunch... there goes the ketosis.

Sometimes it's an omelet or scrambled eggs 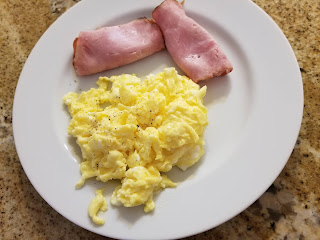 sometimes a fried egg over medium...

and then there's his pancakes made with almond flower and a side of bacon... 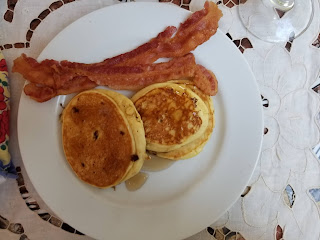 or, waffles from a Keto mix gifted us from a friend.  Or... 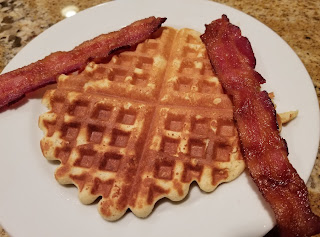 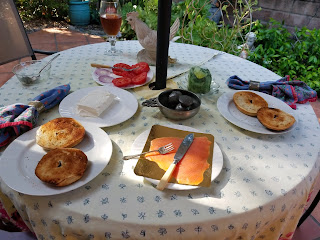 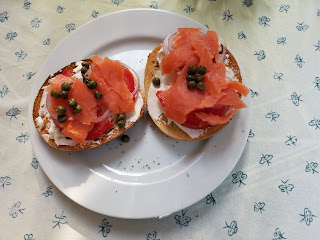 OK - Richard didn't bake the bagels or grow the tomatoes or catch the salmon - nor did he hold a gun to my head forcing me to eat them, but, I'm a New Yorker - we love bagels - well, real NY bagels - and these were REAL New York bagels given to us by a friend at the beginning of the pandemic...  but, I still blame Richard - what's a husband for anyway?
Avocado toast!

Then there's Richard's baked goodies to be eaten anytime...

Lemon Bread!
Buttermilk Drop Biscuits!!
No Knead Bread!!!
Fresh out of the oven, still warm with butter melting on the slice - how does one resist?

I won't even get into the amazing pasta dishes he's made since the sequester -- that will be my next story to tell... with pulchritudinous pictures.

I am truly amazed that you only gained five pounds.......that is a terrific accomplishment! Judy N.

I’d say those pounds were worth every delicious bite! Yum! - Julie H.

Nice to get your Covid update. Only a five-pound weight gain since Covid? I'm impressed. I hope you and Richard are well and in peace during these difficult times. It seems Ojai suits you.
Lynda

I can't believe you've gained as little weight as you report! Richard's food is gorgeously presented and I can almost taste it. Mark turned 65 yesterday and insisted he did not want a party. just wanted to spend the day being adored by me and our doggie Emma. We complied and after a day of sun bathing, swimming in our pool, and hiking at a local park (gorgeous weather), we had an outstanding dinner which Mark had wanted. We don't eat beef ever but for his birthday we got filet mignon and Mark knew just how long to let it cook on our grill. I made the dessert and made sure there would be left overs. It was a divine dinner with great champagne and wine as well.
Eat on, sister. Love to you and Richard

Sounds like a perfect way to turn 65. Love back to you and Mark. xo

GOOD ON YA, supporting your husband that way!Ive gained much more than 5 lbs and I am now trying to go the other way, you are NOT helping! OK our bike ride in New England ought to do the trick next week, but what'll we eat out there? THAT remains to be seen. Thanks for the inspiration