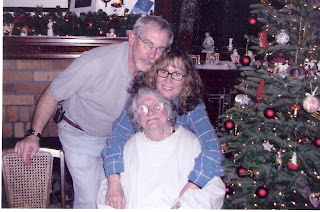 For the past 200 years (water from the tap here in LA keeps us young and unwrinkled, just ask any plastic surgeon at Cedars), my husband and I have hosted Christmas Eve supper for friends and family and their families. Richard cooks. I decorate.

Prior to our 200 years here in Tinseltown, we lived in Manhattan and every year we traveled to Connecticut to celebrate Christmas with Vi (my mom) and a variety of cousins. This was before Richard cooked, though I did decorate our apartment.

One year we invited friends and their two bearded collies to join us for Christmas in Connecticut. The basement of my mother’s house was semi-finished and had a couple of beds – perfect for the two guys and their dogs. So we rented a car and drove up I-95 to the town of Danielson, just a teaspoon full of nutmeg away from the Massachusetts- Rhode Island border.

When we pulled into my mom’s driveway, snow was falling and baking smells were wafting from her kitchen. Vi was overjoyed to see us – even the dogs. We sipped hot cider and ate comfort food in front of the fireplace and marveled that the dogs didn’t attack the ornaments on the tree.

While we were sipping, eating and marveling, I decided to take advantage of her ‘free’ washing machine. If you’ve ever lived in an apartment and had to schlep your laundry down to a basement and stuff the washer and dryer with quarters you horde somewhere in your lingerie drawer just so you can have clean underwear, sheets and towels, you know what it means to find a ‘free’ washing machine, but I digress… I turned on the water, added some of mom’s Tide and stuffed my grimy, but beautiful white down coat imported all the way from Paris, into the machine.

Did I mention that Danielson is a tad rural and most homes, even cozy, tiny one’s close to town like Vi’s, had cesspools? Well, everything backed up… and I mean everything.

Did I mention that Vi had only one bathroom? Well, okay, now, none.

Calmly, Vi called whoever it is you call when you have a backed up cesspool, though it was past business hours and was told that someone would be out to the house first thing… first thing the next day.

Did I mention Vi had very nice neighbors? Well, she did. So before we went to bed, we all ‘dropped by’ to use the ‘facilities.’ Vi brought a basket of her homemade cookies.

I was sort of a tomboy as a kid and had what some shrinks might call penis envy. I envied the facility that boys have when using the facilities. I hadn’t had penis envy in years, but I did that Christmas. Vi had a very big back yard that ended in an incline down to the Connecticut river. There was also a back door in the basement which led to that yard and incline and river… During the night and next day, the dogs and the boys availed themselves of that back door that led to the yard… that led to the incline… that led down to the river. Vi and I ran back and forth to her lovely neighbors, each time having to make conversation we really didn’t want to make, but neither of us wanted to be squatting in the snow - if you get my drift.

Did I mention that the temperature went well below freezing that night? Well, it did. So when we all were ready to leave for my aunt’s who lived nearby to shower, the car was frozen. Wouldn’t start. At all. After Vi checked in to confirm her appointment with whomever you check in with when you have a backed up cesspool, Richard called Triple A. He had to wait to call because cell phones weren’t invented yet (we really are over 200 years old).

Triple A arrived at the same time as “cesspool cleaner guy.” The car was soon fixed, but not the cesspool, so off to auntie’s we went.

Did I mention that auntie lived in a retirement village in a tiny, tiny apartment with one tiny, tiny shower? Well, she did. But my aunt’s a hoot and loved me, Richard, and our friends, even the dogs, so we all sipped tea and chatted with her while we took turns in the bathroom. By the time we’d all finished, it was hours later because we kept running out of hot water and had to wait for it to heat up again.

When we arrived back at Vi’s, the bathroom had been restored to its former useable glory. The water was running in the kitchen and normal holiday life was merrily rolling along. We had a glorious Christmas day and as guests arrived no one could stop laughing as we told about our cesspool saga.
Posted by ilona saari at 11:05 AM 3 comments: