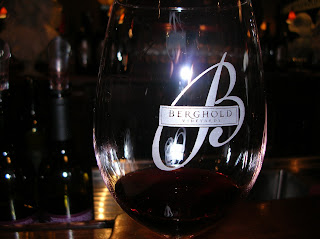 STUCK IN LODI, AGAIN
Pt. 3
Berghold Vineyards
Yup.  Still stuck in Lodi sipping some delicious wine.  Tough job I know, but you know what they say (whoever “they” are): “Someone’s gotta do it.”
And, remember… this was Thanksgiving week. Richard and I have a “tradition” when going north to Sacramento and the Bay Area for the turkey holiday.  No Christmas music on the drive up… but, once that turkey’s been carved and eaten, Christmas music in the car prevails.  However, even though we’d devoured the turkey two days prior, I wasn’t getting into the Christmas spirit.  Well, that was about to change.
When we walked into the tasting room (actually two large rooms) of the Berghold winery, “It’s Beginning To Look A Lot Like Christmas” streamed through my head. Owner Joseph Berghold and his wife (and winery manager) Julia... 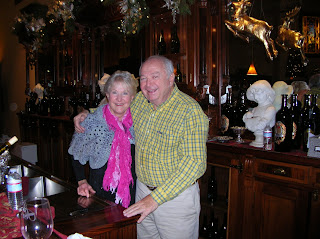 ...had decorated every corner and tabletop in the rooms with a holiday visual wonderland. 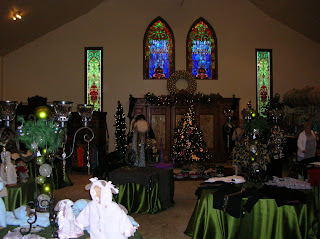 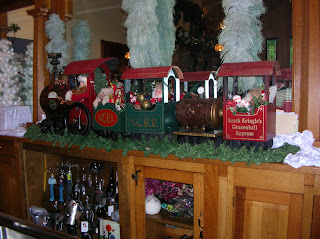 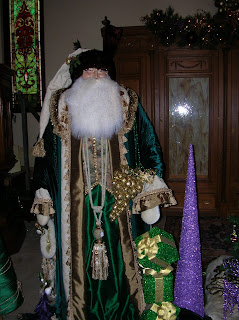 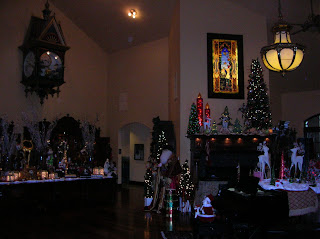 Transplanted from Pennsylvania, the Bergholds have been farming grapes since 1986 and opened their winery and tasting room in 2005.  Their son Miles is their winemaker, keeping it all in the family.
The winery’s décor is Victorian and filled with marvelous American antiques (circa 1800s) the Bergholds have been collecting since their antique business days back in Pennsylvania. The winery is filled with one of the largest collections of fine American antiques in the country including a clock from Amish country 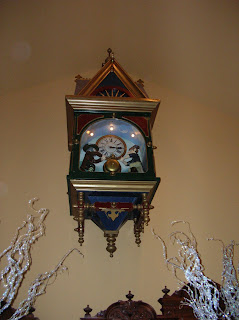 stained glass windows, one from a Mainline Pa. mansion 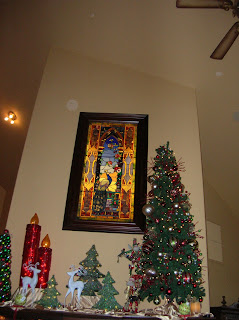 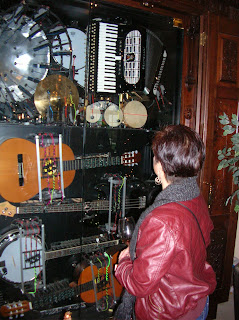 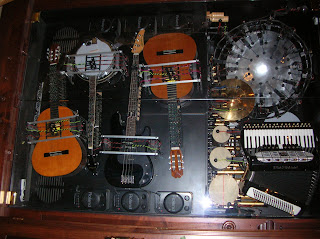 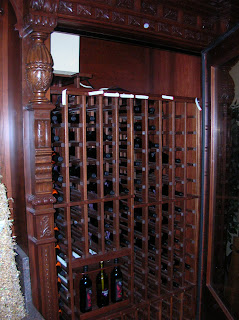 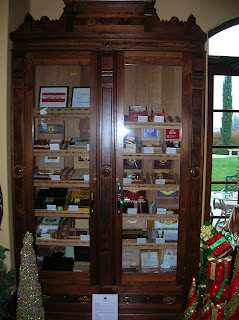 and a carved, mahogany bar that began its life in New York, but was moved to a bordello in a coal mining town in Pennsylvania (love this provenance) and now graces the winery where tasters can sidle up and sip to their hearts’content. 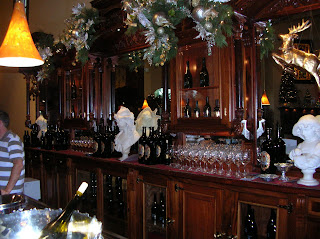 But above all, this is still a winery and, as Joseph gave us a tour of his collection, we sipped wine made from grapes on the surrounding 85 acres.  And, what an early Christmas present these wines turned out to be. 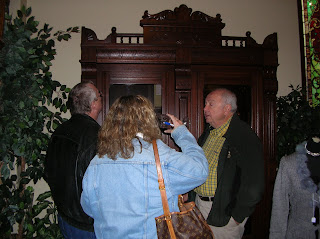 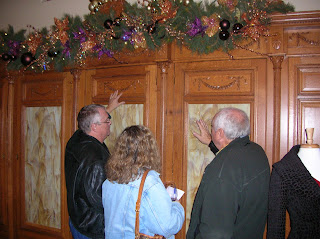 The 2008 viognier ($19.99) with its rich fruit and spice flavors and buttery aftertaste was my favorite white. 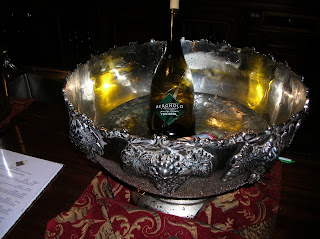 And three reds topped my list: The 2007 Foot Stomp Zinfandel ($22.99), the 2007 Merlot ($22.99) and the 2004 Cabernet Sauvignon ($29.99).
Well, four. Can’t forget the non vintage 2009 Crankcase red ($34.99), a secret blend of four varietals  - big, bold, bawdy and bursting with fruit.  Perfect for sipping at a bar with a bordello in its past.
We marveled at the antique collection, sipped wonderful wines, then bid farewell to the Bergholds.  Our tasting adventure was over, but I do hope to be stuck in Lodi again.
Berghold Vineyards
17343 N. Cherry Road
Lodi, Calif. 95240
209-333-9291
info@bergholdvineyards.com
www.bergholdvineyards.com
Note:  As is customary, wines are discounted for wine club members.
Posted by ilona saari at 2:11 PM No comments: 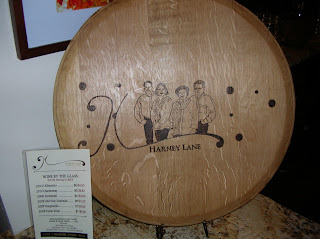 STUCK IN LODI, AGAIN
Pt. 2
Harney Lane Wines
With our trusty Lodi wine-country map in hand (and make no mistake about it, this is “country”) Bob, Nguyen, Richard and I jumped back into the comfy Forrester happy to still be stuck in Lodi.
After driving down country roads, we pulled onto Harney Lane with high hopes that more fine wine awaited us. Within a nanosecond we were parked and walking past a lovely garden... 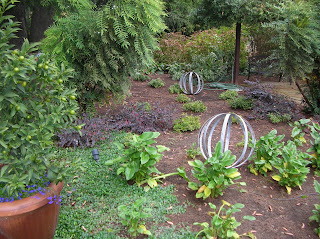 an outdoor patio, fire pit and all... 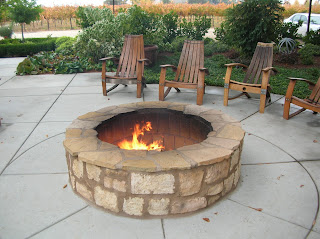 and up to a simple, tasteful modern structure of stucco and flagstone bricks.
Simple, clean lines with a beige and brown color palate prevailed inside the tasting room.  We sidled up to the honey and brown-hued granite bar to start some serious sipping. 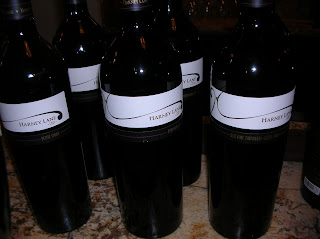 Brindy and Courtney were our baristas. 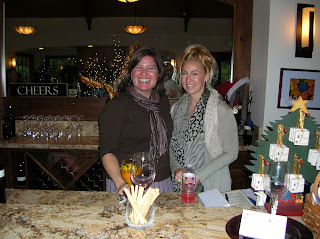 Their names suited them. Warm, welcoming, and outgoing, they were perfect ambassadors for the winery that adds “love, laughter and family” to every bottle of wine.  I don’t know how you bottle love, laughter and family, but Harney Lane is a family owned and operated winery (and vineyards) headed by George Mettler who, like his ancestors, has been growing grapes his whole life (the first family vineyard was planted in 1907).
Brindy and Courtney offered to serve us in the lounge area that boasted comfortable woven rattan and leather chairs in front of a cement fireplace, and surrounding an old luggage train depot cart serving as a coffee table. 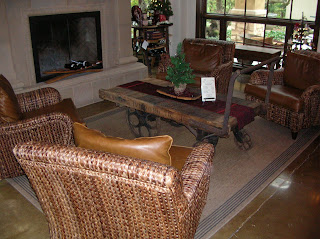 But I like standing at the bar – it’s more conducive for conversation with the baristas and for asking questions about the wine… so at the bar we stayed.
One of the first things I noticed was a proudly displayed autographed bottle of wine.  The girls told me that it was from the winery’s very first vintage in 2006 signed, in celebration, by its wine club members. 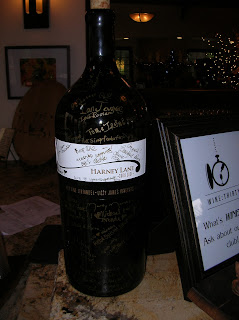 Though I liked the Harney Lane’s whites, especially it’s crisp and citrus-y 2010 Albarino ($19) that would be a perfect match for some spicy Thai food, it’s the winery’s red wines that are the stars.
The 2008 Lodi Zinfandel ($22) a gold 2011 Orange County Wine competition winner was just that – a winner.  And the “just released” 2009 old vine Lizzy James Vineyard Zinfandel ($33) was velvety smooth, rich and delicious. 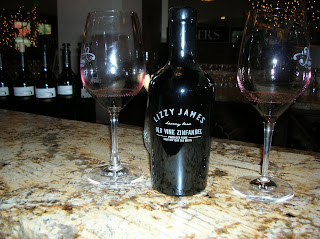 Three other favorites were the 2009 Tempranillo ($25), the 2008 Petite Sirah ($24) and the “I could sip this all day” Old Vine Zinfandel Port ($35), dessert in a bottle.
All wines are discounted for Wine Club members – a club definitely worth joining if you’re not able to visit Harney Lane.  It’s out in the country and far from the fast lane, but if you find you’re stuck in Lodi, again, don’t kick into the passing lane for this one.  Stop and smell the bouquets.
Harney Lane
9010 E. Harney Lane
Lodi, Calif. 95240
209-365-1900
www.harneylane.com
The tasting room is open Thursday through Monday 12-5pm.
Posted by ilona saari at 12:16 PM No comments: 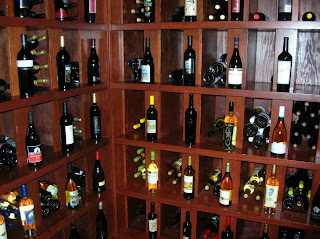 STUCK IN LODI, AGAIN
Pt. 1
OK – I’d actually never been to Lodi until this past Thanksgiving week when we visited brother Bob and sister-in-law, Nguyen, in Sacramento.  Always up for discovering new wines, we piled into their comfy refrigerator white Forrester, popped Creedence Clearwater Revival into the CD player and headed out to Lodi wine country, an area Richard and I were anxious to explore.
Our first stop… the Lodi Wine & Visitor Center for a map of the local wineries with tasting rooms and, lo and behold, we discovered the center had it’s very own tasting room: “Wines of Lodi.”  Let the “games” begin! 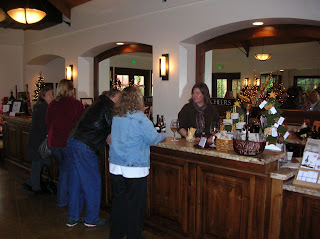 James was our barista, a fun, knowledgeable young guy who loved talking wine.  He told us that Wines of Lodi represented about sixty wineries and that a panel of judges, in a blind tasting, pick the best wines for the room’s wine club. 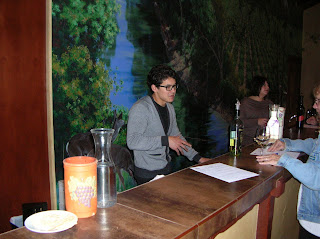 First up - the 2009 Peirano Estate The Other ($14) white blend of 65% chardonnay, 25% sauvignon blanc, and 10% viognier. Just scrumptious. Fruity, but with some vanilla keeping the wine from being “thin.” 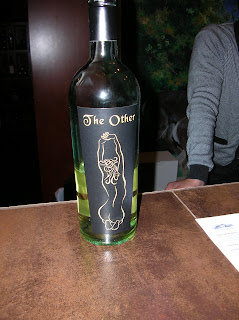 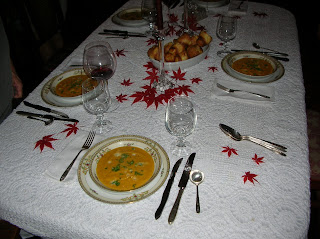 NGUYEN’S CARROT SOUP
It’s the dawn of 2012 and both Richard and I are trying to regroup after we crashed and burned the day after Christmas.  It’s a good thing we had a selection of comfy flannel pjs and flannel sheets as we recovered from whatever ailed us.
But, a diet of white toast, white rice, and plain white spaghetti with cans of Campbell’s chicken noodle soup to "go with" only encouraged visions of real food to float in my head like sugar plums… so much so my that New Year’s Eve opinion piece for The Patch was all about The Holiday Binge.  Food, glorious food!
http://studiocity.patch.com/articles/the-holiday-binge
But that’s not all… memories of warm, sumptuous, delicious, creamy carrot soup also danced around in my head… specifically my sister-in-law, Nguyen’s, carrot soup.  Well, it’s not really “Nguyen’s” carrot soup, though she did tweak it here and there, but the carrot soup from the 1977 edition of Moosewood Cookbook.
It was so good, I thought I’d share.
Happy New Year everyone!!!  May you all have a wonderful food, wine, and travelicious 2012!!
CARROT SOUP
1977 Moosewood Cookbook
Ingredients:
2 lbs peeled or scrubbed, chopped carrots
4 cups stock or water
1-1/2 teaspoon salt
1 medium potato, chopped (optional, for heartier soup)
3-4 tablespoons butter
1 cup chopped onion
1-2 small cloves crushed garlic
1/3 cup chopped cashews or almonds
Choose one:
1 cup milk
1 cup yogurt or buttermilk plus a little honey
½ pint heavy cream
¾ cup sour cream
Seasoning choices:
2 pinches of nutmeg, ½ teaspoon dried mint, dash of cinnamon
1 teaspoon each of thyme, marjoram and basil
1 teaspoon grated ginger
Directions:
Place carrots, liquid and salt (and potato if you’re using it) into a medium sized soup pot and bring to a boil.  Cover and simmer for 12-15 minutes.  Let it cool to room temp.
Sautee the onion, garlic and nuts in the butter until the onions are clear.  You can sprinkle in a little salt to help draw the moisture out of the onions.  Towards the end of cooking, stir in the seasoning combo of your choice.
Puree everything together in a blender until smooth. You can deviate from the recipe at this stage and dump the sautéed onions, garlic and nuts into the pot w/ the cooked carrots and use an immersion blender to puree.  It saves on dishes and energy.
Whisk in the dairy product of your choosing.  If you want, you can leave this step out until you’re just about to eat a bowl of soup.  Stir in a little milk, a spoonful of yogurt or some cottage cheese just before serving.
Garnish w/ toasted nuts, some toasted bread crumbs or eat just as it is.
Posted by ilona saari at 7:56 AM No comments: