Over the meadow and through the woods to Grandmother's house we go...  That may be true for a lot of families in America in the 1950's as they made their way to grandma's for Thanksgiving, but not my family.  We had another route.  Dressed in our Sunday best (it was the fifties) my brother and I would climb into the backseat of my father's Ford, my mom nestled in the front passenger seat holding her onions au gratin casserole on her lap as my dad got behind the driver's wheel and drove us over the streets of Queens and through the Belt Parkway to grandma's house in Brooklyn.

Mumu and Poppy, as Robert and I were taught to call them (maybe that's what Finn children called their grandparents in Finland, I never knew for sure), lived in a brownstone a couple of blocks from Sunset Park.  We arrived at their top floor, spacious and gracious apartment, around eleven in the morning so that my mother could help Mumu prepare the Thanksgiving meal, including mom's onions au gratin that went into the oven as soon as the turkey came out to "sit" for awhile.  Poppy and my dad talked politics (argued is more accurate) and we kids were left to fend for ourselves.  Well, there wasn't much for young kids to fend for in a game-less (except cards) apartment filled with Victorian antiques and Persian carpets, so we wheedled our dad to leave politics in the living room, and take us to the park.  Poppy never joined us.

The park was expansive and quite beautiful, with gorgeous views and many places to explore, but what I remember most is the old men scattered around the park's many acres, sitting at cement tables playing chess or checkers.  I wondered if, like us, they'd had to escape their apartments for a bit til Thanksgiving dinner was ready (men who weren't chefs in restaurants rarely cooked, or even helped, back then - it was women's work).  By the time we got back to the brownstone, dinner was ready... Robert and I would wash our hands and take our assigned seats as the turkey was brought out and we all ooh-ed and ah-ed.  The table always looked splendid with Mumu's finest china and shiniest sterling silver place settings displayed on top of a white damask tablecloth.  Each of the linen napkins was fanned into silver napkin rings.  White tapered candles in silver candlesticks were lighted and dad would begin his 'carving the turkey' ritual.

The aromas of the meal made the apartment smell heavenly.  Mom would take off her apron and serve the mashed potatoes, stuffing, Mumu's cranberry sauce and string bean casserole. But, for me, it was my mom's onions au gratin that always won  the day.  It's a dish she only made three times a year... Christmas, Easter and Thanksgiving.  Sometimes with roast beef.  Sometimes with ham or pork roast.  And, like Thanksgiving, sometimes with turkey.  A meat lover as a kid, onions au gratin was the only vegetable I really liked.  Of course, if she left out the onions and served only the 'au gratin,' I would have been a happy girl.  She had me at melted cheese. I devoured my turkey, the mashed potatoes, stuffing and dinner roll (or those carbs!) and managed to get through the string beans (I think it was the added mushroom soup and crunchy onions that did it), but I savored those onions and often had seconds.  It's amazing that I was a skinny child.

After mince meat and pumpkin pies, mom and Mumu spent the rest of the afternoon and early evening cleaning up and doing dishes as Poppy and my dad retired to the living room.  Poppy was not a verbose kind of fellow except when arguing politics.  He'd lived in America since he was 18, but still preferred to speak Finnish.  He wasn't affectionate and rarely talked to my brother or me when we were little, but somewhere in the back of his mind, he thought to make a connection with us.   An hour or two after dinner and Robert and I began to get bored (they didn't have a TV), Poppy would lie on his stomach on living room carpet and ask us to take turns walking on his back. Though he was a builder, he still did a lot of carpentry work and lifting on job sites, and walking on his back was comparable to getting a massage - besides, we didn't weigh all that much.  By the time we were finish and Poppy was back in his comfy easy chair, mom would be done in the kitchen.  It was time to go home.  As we left, Poppy would hand Robert and me each a shiny half dollar for relieving the soreness in his back.

By the time I was in high school, our Thanksgiving family had dwindled down to four.  Mom, Robert, Poppy and me.  Poppy moved in with us after Mumu died.  My dad was already gone. But mom eventually remarried and moved to Connecticut.  Poppy moved back to Brooklyn and I rarely saw him.  I was out of college and living on my own when he finally joined Mumu and his son, but I still have such clear memories of their apartment in Brooklyn when I was a little girl, my sleepovers there, scattered throughout the year, going to Flatbush so she could buy fabric (she was an amazing dressmaker), the beautiful Christmas and Easter outfits she would make for me in velvet and dotted swiss, but the most vivid memories of my early Thanksgivings are of walking on my grandfather's back and mom's onions au gratin.

My mom died over a decade ago and I haven't had that dish since.  This year we were invited to friends for Thanksgiving and Richard made the casserole for the gathering.  Reading my mom's handwritten recipe she had given me years ago, Richard did a little online sleuthing and found out that the ingredients used were popular for such dishes during the Depression and WWII because of rationing in America.  He made the onions au gratin true to that recipe.  It still tasted as I remembered. 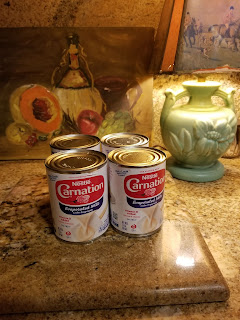 If you're using fresh pearl onions, boil them with the skins on as it's easier to remove the skin after their cooked. Defrost frozen onions.

Preheat oven at 350 degrees (tho some online recipes say 375) 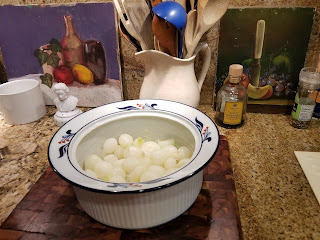 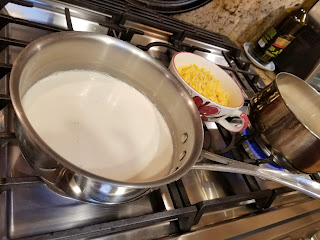 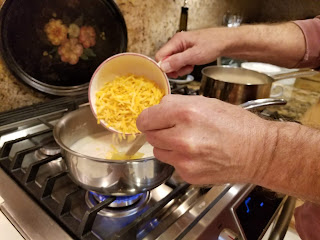 Pour over the onions ... 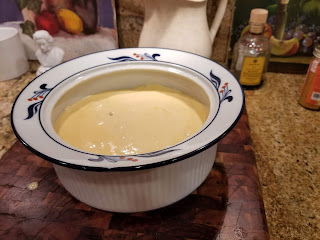 and bake in the oven for about a half-hour or until bubbly and slightly brown on top. 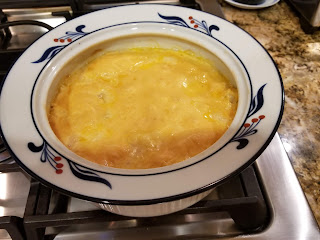 My mom would have been so proud!!!