ON THE ROAD TO MOROCCO - Moroccan Chicken That Is 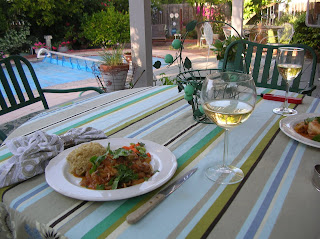 ON THE ROAD TO
MOROCCO –
Moroccan Chicken That Is
My love affair w/ chicken continued the other night when Richard made chicken, Moroccan style.
Sadly, we didn’t eat this divine dish at Rick’s Place in Casablanca… but, sitting outside by our pool on a warm summer’s eve, we clicked our glasses and toasted “Here’s looking at you, kid.” 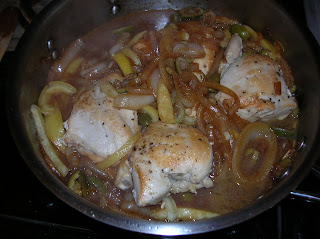 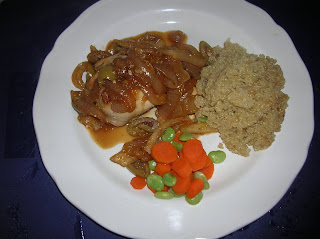 Serves 4
MOROCCAN-STYLE
Preserved Lemons
(from Ruth Reichl’s “The Gourmet Cookbook”)
Ingredients:
2-1/2 – 3 lbs lemons (10-12) – Meyer lemons if you have them
2/3 cup kosher salt
¼ cup olive oil
Special Equipment:  a 6-cup jar w/ a tight-fitting lid
Directions:
Blanch 6 lemons in boiling water for 5 minutes; drain.  When cool enough to handle, cut each lemon into 8 wedges and discard seeds.  Toss w/ kosher salt in a bowl, then pack, along w/ salt, into jar.
Squeeze enough juice from remaining lemons to measure 1 cup.  Add enough juice to jar to cover lemons and screw on lid tightly.  Let lemons stand at room temperature, shaking gently once a day, for 5 days.
Add oil to lemons and refrigerate.
Cookbook’s note:  Preserved lemons keep, refrigerated, for up to one year.
Or, if you’re lucky, you’ll have Kyle as a friend who’ll give you a jar of preserved lemons she made.
Posted by ilona saari at 9:04 AM No comments:

ON THE ROAD AGAIN IN SONOMA-Pt. 9-Sonoma-Cutrer Vineyards-The Final Chaper 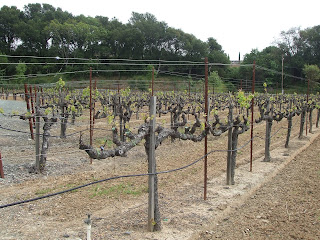 ON THE ROAD AGAIN IN SONOMA
Part Nine
Sonoma-Cutrer Vineyards
The Final Chapter
You know that old saying:  All good things must come to an end?  Well, I hate that it’s true.  Our Sonoma winery road adventure was over and waking up in our condo on our final morning was bittersweet.  Richard and I love the beauty of the towns and the landscape of valley as much as we love venturing from tasting to tasting at winery after winery.  We could live there… really.  So, before we left the region, we decided to have one last ‘hurrah.’
We followed a long, rural, winding back road in Windsor past cows grazing in pastures and bees buzzing in grapevines to Sonoma-Cutrer Vineyards.  The winery’s modern structure... 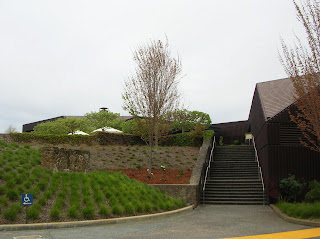 ...is nestled on beautiful acreage which includes a pond... 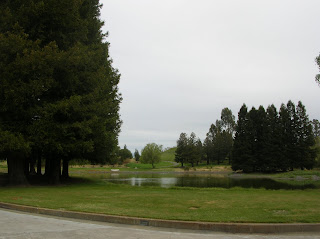 ...and a ‘front lawn’ world-class croquet court – so world class, in fact, the world croquet championships are played there on that very lawn. 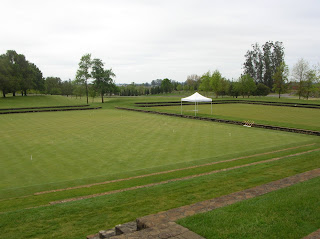 Sonoma-Cutrer was established as a vineyard in 1973, and Richard and I have often enjoyed their chardonnays at home or at a restaurant so we were looking forward to sipping them ‘on-site.’
The tasting room, opened only last July, is a modern glass and stone room w/ simple wine displays... 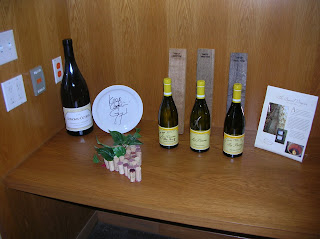 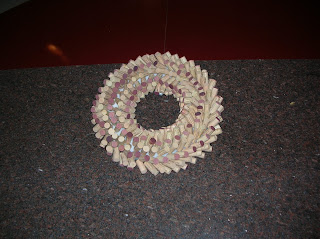 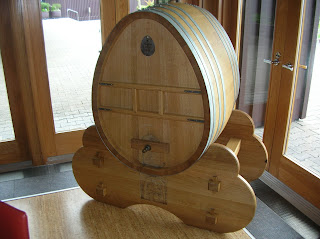 ...giving it a cool (as in temperature), sophisticated feel…  but the service was old-world warm and friendly.
Scott Mansfield was our knowledgeable barista, who told us that when the winery began the owners decided to focus on one wine:  chardonnay (the reigning queen of California whites) produced exclusively from its own vineyards, all of which are fermented and aged in French oak and crafted using traditional Burgundian methods.
Our first pour was the 2009 Russian River Ranches Chardonnay ($23) – a taste of honey w/ a touch of caramel… those vineyard bees would have swarmed to this honey of a wine.
Next came the 2006 “The Cutrer” Chardonnay ($35) – crisp, yet creamy and full-bodied.  I liked the aroma of honeysuckle and the slight fig and nut taste.
The 2006 Les Pierres Chardonnay ($32) was like biting into fermented fruit mixed w/ a bit of butterscotch and nuts.  A nut and butterscotch candied apple of a wine.
A limited release, the 2006 Founders Reserve Chardonnay ($50) had a gorgeous golden color and offered flavors of lemon custard, apples and honey.  Unfortunately, it’s sold out.   So why did Scott give us a taste?  Perhaps, so I could let you know how delicious it was – or maybe he just needed to finish up the last bottle and we were happy to oblige.
Our last taste was the vineyard’s first step into ‘red’ country w/ its 2007 Pinot Noir-Russian River Valley ($34) – a nice wine w/ scents of berries accented w/ cinnamon and sweet pipe tobacco.   Yup, pipe tobacco that I remember from my youth when my dad sat in a big easy chair in our living room and packed the sweet, fragrant tobacco into his pipe as he readied to read the evening newspaper.  I think he’d like sipping this wine as he checked out the front page.
Our tasting was done and it was only 11:30 in the morning!  But, no more – we had miles to go before we sipped… Yes, miles to go before we sipped.
Sonoma-Cutrer Vineyards
4401 Slusser Road
Windsor CA 95492
707-237-3489
http://www.sonomacutrer.com/
Posted by ilona saari at 12:11 PM No comments: 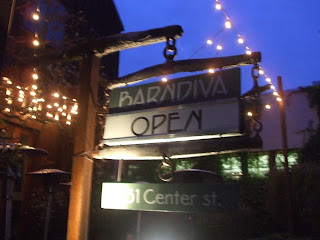 ON THE ROAD AGAIN IN SONOMA
Part Eight
Barndiva
The Last Supper
The first thing that comes to my mind when someone mentions a last supper is the painting by DiVinci depicting Jesus sitting at the center of a long dinner table celebrating Passover w/ his disciples.  Putting the whole wafer and wine thing aside, have you ever wondered what they had at that last supper?  Matzo ball soup?  Brisket?
Well, our last supper in Sonoma was at Barndiva.  There were no wafers (though some very tasty, crusty bread w/ tart raspberry jam)... 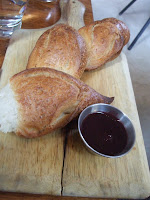 ...no matzo ball soup and no brisket… but it was an absolutely religious experience.
The ‘backstory:’
Barndiva – barn*diva – proper noun - is a nickname that legend says was invented to commemorate the restaurant’s owner Jil Hales’ love of dancing to music in her family barn, but Jil, along w/ her husband and co-owner Geoffrey, chose the name because of their desire to elevate the farmer to “diva” status.   A ‘sustainable’ restaurant, Barndiva uses only ingredients from local farms within a 30 mile radius.  This, of course, also reduces its carbon footprint, always a good thing.  To further help the environment, used cooking oil is recycled to run farm tractors, and organic trims from the kitchen feed the chickens who lay the restaurant’s eggs.  Barndiva is also a member of the Fork & Shovel, a farmers’ collaborative including 30 restaurants that support each other in this quest to deliver great food using local produce, meats and products.  Barndiva even dry-farms apples, figs and chestnuts.  That’s very cool, especially since being environmentally conscious doesn’t keep them from serving incredibly good food.
The ambience:
To get to Barndiva’s front door, we walked past an outdoor patio 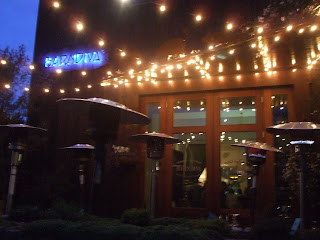 down a lush hedge-covered arched nave alongside the barn-like building.
After entering the restaurant... 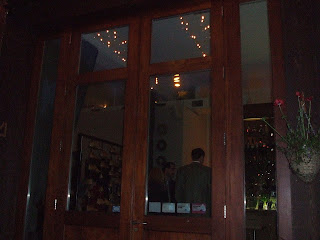 ...the first thing I noticed was a room divider made up of old wooden cobbler shoe molds separating the long dining room. 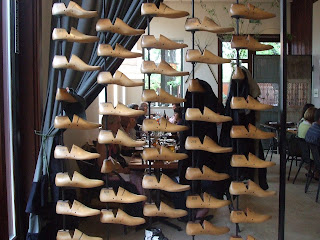 The high ceilings gave the space a cathedral-like feeling, as the cream colored walls w/ wainscoting and the dark wood bar w/ its interesting art deco-ish back wall beckoned us in. 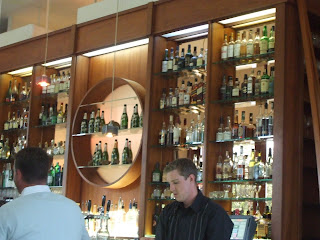 Adorning the walls were wire fish/animal sculptures that cast web-like shadows as the sun set and the lights were turned on. 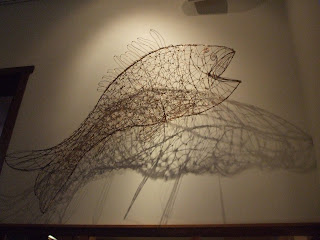 One whole wall consisted of banquette seating w/ black pinstriped seat cushions and light gray back pillows fronted by bare wood tables.  And then there was the back-lit wine wall that faced our table which looked like a stained glass window... 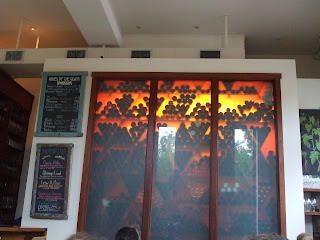 ...enhancing our feeling that this was going to be a divine evening.
The food:
Head chef Ryan Fancher worked w/ Thomas Keller (the Pope of American cuisine) at the French Laundry, then helped him open up Per Se in New York before coming to Barndiva.  Richard and I had one of our most memorable meals EVAH at the French Laundry so we truly were looking forward to this last supper in Sonoma.
As we sipped our drinks (a martini for me), the evening’s service began with…
tomato goat cheese puffs w/ lavender honey… 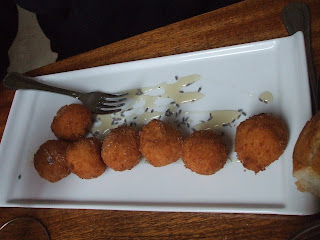 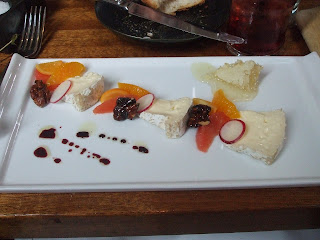 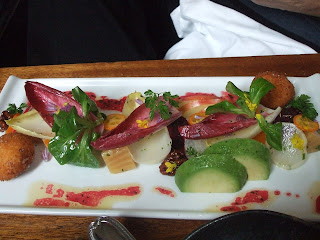 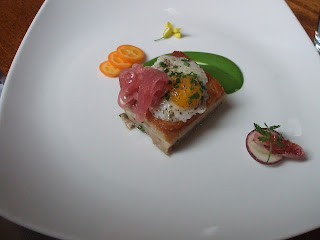 All directly from the gods!  Hallelujah!
Then came the entrees – a veritable communion of flavors…
Bob and Richard had the caramelized sea scallops w/ peas, bacon, roasted romaine, Kendal Farms crème fraiche, and sorrel nage.  I’m not sure what ‘nage’ is, but after tasting this dish, I’m very sure it was heavenly. 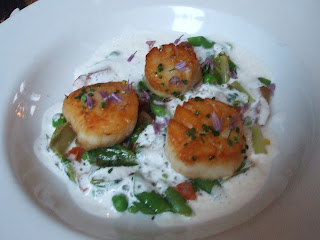 Nguyen opted for the seared Alaskan halibut, artichoke ravioli, spring onion soubise, avocado and fennel.  I had a bite.  The blend of flavors – divine… 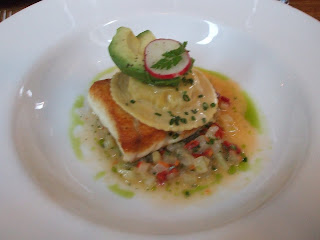 I had the Creekstone Farms’ beef ribeye w/ marble potatoes, pearl onion, carrot, garlic confit and horseradish bavoroise.  Wow! This was the rapture for me! 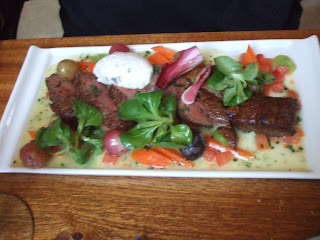 So, my final judgment on this last supper?   Manna from heaven!
As I said, a religious experience.
Barndiva Restaurant & Lounge
231 Center Street
Healdsburg CA
7170431-0100
barndiva.com
info.barndiva.com
Open table
Posted by ilona saari at 9:07 AM No comments: